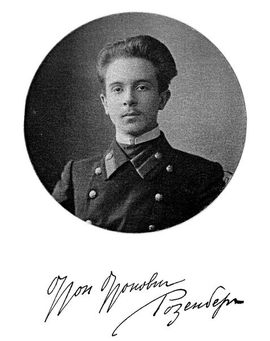 In 1911, he graduated from the Oriental Faculty of St. Petersburg University; his supervisor was F. I. Shcherbatskoy. After graduation, R. taught at the University, worked at the Asian Museum. He passed training in China and Japan. He wrote several research and popular articles, composed two dictionaries, and prepared a still actual book ‘Problems of Buddhist Philosophy’ (1918). His early death prevented him from further achievements.

He declared a principle of considering Buddhism from the points of systematic and key meanings, i.e. as a complicated structure, which included phenomena of various levels – from popular religion to scholastic philosophy. He harshly criticized Eurocentricism, which interpreted other culture as alien one and tried to explain it through its own categories, searching for similarities of Buddhism with some aspects of European culture. He kept historical principle in his Buddhist studies and refused from attempts to reconstruct ‘Buddhism in a whole’; he analyzed not only written monuments of the past, but also living practice of contemporary religious tradition; he studied both the vast complex of commentaries, and new manifestations.

On his opinion, Buddhist philosophy was an integral part of Buddhism, and he preferred to use retrospective approach to studying and interpreting material: through the contemporary forms gradually go back to the ancient phenomena. He offered to ‘live through’ oriental culture. To look from inside and to escape European analogues for the sake of understanding the subject.

He gave a thorough attention at the issue of the altered states of consciousness, and to the problems of interaction between Europe and the East. He argued for the historical and cultural peculiarity of metaphysics in Buddhist philosophy.