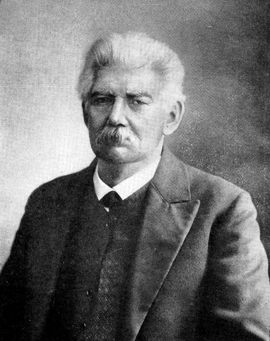 In 1854-1858, he studied at the University of Berlin. In that period, famous historian and geographer Karl Ritter played a significant role in the shaping of his scholarly views. He also visited lectures by the founder of comparative linguistic F. Bopp; and in Halle – those of well-known specialist in phonetics and in the history of Indo-European languages A. Pott. But the decisive influence on R. was by orientalist Wilhelm Schott, who taught him Mongolian, Tartar, Manchu, and Chinese languages. W. Schott had close contacts with Russian scholars, who participated in the work over a professional periodical publication in Berlin specially aimed at presentation of Russia research works in Europe (Archiv zur Wissenschftlichen Kunde von Russland). As a result, in 1858, after the defense of his thesis ‘On the Influence of Religion at the Peoples of Asia’ in Jena, R. got the Professor degree and returned to Russia.

In St. Petersburg they promised him a participation in the expedition of the Russian Geographical Society to Amur for studying Tungus; but he failed to go there. Although, he received an offer to teach German and Latin at the Barnaul Mining School and made summer travels through the Altai Region. He moved to Barnaul, starting his Altai Period (1859-1871). He studies local Turkic languages, collected folklore, got information on the common life and economics of the Altai peoples. He called native Altai man Yakov Tonjan his teacher in Altai language.

During his first travel of 1860, R. was interested in materials on the ethnography, language, folklore, but he also got data on the trade links between Russians and Mongols. His expeditions provided precious information of the life of native population of Siberia, Middle Asia and Kazakhastan – rather distant regions of the Russian Empire.

As a result, R. became linguist with deep knowledge of Turkic languages and laid the foundation for the new step in the development of Turkology.

In 1871, he went to St. Petersburg to clear out his further life, and made a stop in Kazan’, where he got an invitation to take the position of Inspector of Tartar, Bashkir, and Kyrgyz Moslem schools of the Kazan’ Educative District. The initiative went from N. I. Ilminsly, Professor of Turkish-Tartar languages at the Kazan’ University. At this position R. tried to create popular non-fiction literature for enlightening local people; such publications were perceived with a kind of suspicion both in ecclesiastic missionary circles, and among officials of the Ministry of people’s Education. However, he succeeded partly with that project. His book ‘Bilig’ (Knowledge) made a great influence at the Tartar literature and language.

Having returned to St. Petersburg in 1884, R. became Academician of the Ac. of Sc. at the Dep. of History and Antiquities of the Asian Peoples, and got a position of Director of the Asian Museum (1885-1890); and later – Director of the Museum of Anthropology and Ethnography named after Peter the Great (1894-1918). In 1908-1918, he was also Chairman of the Society for Studying Siberia and Improvement Its Common Life.

His important achievement was the foundation of the international society of orientalists aimed at joint efforts in collecting and exchanging data. He declared such aim at the XII Congress of Orientalists in Rome in October 1899. That initiative led to numerous successes in various fields of oriental studies.

An obvious benefit of R. was his thorough study, translation and publication of a monument of Old Uigur literature of the twelfth century – Kutadgu bilyk’ (Blessed knowledge) by Jusuf Balasaguni. The results of his work with Uigur materials were reflected at another work by R.: ‘On the Issue of Uigurs’ (1893).