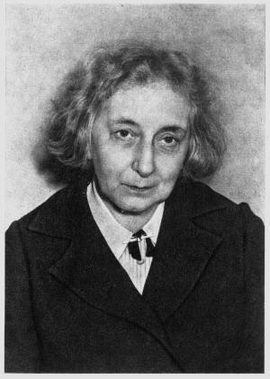 She was from the Gentry family of the Stebnitskys. In 1911, she finished the private gymnasium of M. N. Stoiunina with a golden medal. In 1912, she enrolled the Historical and Philological Faculty of the St. Petersburg Bestuzhev High Female Courses; she graduated from them in 1918. In that period, the main sphere of her interests was shaped: it was the history of the Orthodox East. It demanded serious studies of Oriental languages, which P. got in 1918-1922, at the Oriental Faculty (since 1920 – Faculty of Social Studies) of the Petrograd University, under the supervision of M. N. Sokolov (Old Hebrew language), and A. P. Aliavdin (Syrian language).

In 1918, on the order of the Petrograd District Soviet, she organized a school of literacy at the paper mill ‘Svetoch’. In 1921-1928, she worked at the State Public Library, studying and making attribution of Syrian manuscripts of the Library.

Since 1917, P. was a member of the enlightening group ‘Voskresenie’ – a kind of the left wing of the Religious-Philosophical Society. Its members tried to unite Christianity and Socialist values; among them, beside the founder A. A. Meyer, there were such persons, as philosopher G. P. Fedotov, artist X. A. Polovtseva, and others. The authorities took the group as a counter-revolution organization, and P. was arrested together with others. On December 11, 1928, she was sentenced for five years of amps and sent to Solovki. In 1931, because of the state of her health, she was transferred to Arkhangelsk, where it became available for her to read books and to make her research. In 1934, she returned to Leningrad.

In 1952, when the Palestinian Society was restored at the Ac. of Sc. of the U.S.S.R., and till the end of her life, she was Vice President of the Society, and Chief Editor of ‘Palestinskyi sbornik’ (Palestinian Collection of Articles) – she prepared 24 issues.

Her field of research included the spiritual culture of the medieval Near East and religion as a part of it. In the private collection of P. in the St. Petersburg Branch of the Archive of the Russian Ac. of Sc., there are many unpublished works, including her early articles on the New Testament and Early Christian literature.