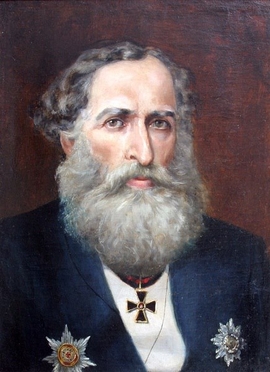 In 1826, he was assigned to the Kazan’ University as Lecturer in Arabic and Persian languages. In 1828, he became Head of the Chair of Turkish-Tartar language. In 1829, he became Honuored Member of the British Royal Asian Society. In 1831, he got his Master degree and a position of Adjunct in Oriental literature for his work ‘A View on the History of Arabic Language and Literature’. Since 1835, he was Correspondent Member of the Russian Ac. of Sc. In 1836, he became Ass. Professor, and in 1837 – Full Professor at the Chair of Turkish-Tartar language. In 1845, he was elected as Dean of the First Department of the Philosophical Faculty of the Kazan’ University. Since 1846, he was Head of the Chair of Arabic and Persian languages. In 1849, he was transferred to the St. Petersburg University at the position of Full Professor. Officially he was assigned to the Chair of Persian Literature, but he also taught Arabic language, and made a serious input into Turkology. In 1855, he became the first Dean of the Faculty of Oriental Languages. In 1863, with his direct support, the Chair of the Oriental History was founded.