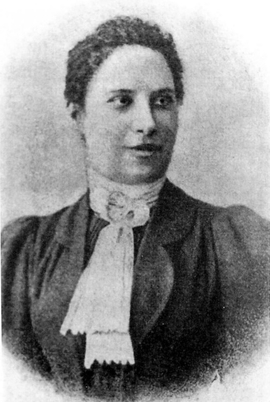 In 1882, she entered the Classical Female Gymnasium of S. N. Fisher passing exams for the fourth grade at once, and finished it with a golden medal in 1886.

In 1887, he went to an expedition to the Russian North with her brother N. N. Kharusin. In the course of that expedition, she started collecting ethnographic material which built the foundation for her research and popular essays; she put a special attention at beliefs and rites of various peoples,

In 1892-1893, Kh. with her brother Nickolay and sister Helena went to Paris, where she visited lectures in the history of religion, Church, family, and general ethnography. In 1907, she enrolled at the Moscow Archeological Institute as a student; in the same year she got an invitation to make lectures at that institute. She was the first woman in Rusian who got a position of Professor in Ethnography.

She discussed the issues of religious history, mainly, in her lectures at the Moscow Archeological Institute (since 1907), and at the High Female Courses in Moscow (since 1909); later she published her lectures in one book.

Since 1927, she taught ethnography at the Moscow State University.

She took the comparative historical method of description as the most fruitful one; she not only summarized and considered the collected material from theoretical point of view, but also one of the first in Russia she started to study theoretical problems of the history of religion, the definition of religion, and more specific concepts – such as Fetishism, Totemism, and Animism.