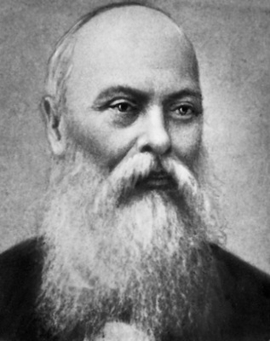 In 1854, he graduated from the Vifanskaya Seminary with the grant of Metropolitan Platon (Levshin), that is why he accepted additional surname ‘Platonov’. In 1858, he graduated from the Moscow Spiritual Academy with the Master degree and got a position at the academy. Since 1867, he was Ass. Professor of Hebrew language and Biblical archeology; in 1883-1895 – Honoured Ass. Professor. For the practical educational reasons he composed the Old Hebrew – Russian Dictionary (not published).

His main works were connected with the Russian translation of Old Testament (the so called ‘Synodal translation’). In 1862-1967, he made preparatory works for the translation of Psalter; then, without assistants, he translated the second part (Ps. 75-150). He actively participated in magazines of the Moscow Spiritual Academy, published a number of articles in the ‘Supplement to the Compositions of the Holy Fathers in Russian Translation’ – from January 1892 till April 1893, he was the first Chief Editor of the ‘Bogoslovsky vestnik’ Magazine.

He took intermediate position in some contemporary discussions: from one hand, he criticized Archimandrite Mikhail Luzin for too much western influence in his works; from another hand, he was hard supporter of the idea to choose the Masoretic Text as a base of Russian Biblical translation. He was against the opinion of Bishop Theophanes (Govorov) who insisted on the priority of the Slavic text and Septuagint (he even hoped to burn the ‘newly fashioned Bible on the St Isaac Square’). The line of Bishop Theophanes was followed by P. A. Yungerov, who translated Old Testament on the base of Septuagint. The discussion was shaped at the theological understanding and became completely archaic after the finding of the Qumran manuscripts.

In 1890-s, G. openly criticized governmental efforts to use Church and clergy as an instrument of inner politics, he wrote pamphlets against bureaucratic injustice. He

headed the municipal authorities of Sergiev Posad, worked out projects of the All-Russian system of insurance.

He wrote more than 50 publications.