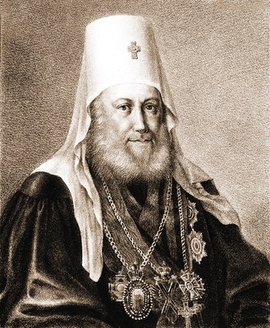 In the years of his learning in the Slavic and Greek and Latin Academy (1785 – 17880, E. visited also lectures at the Moscow University, where he made acquaintance with N. I. Novikov and his milieu. At the same time, he worked as corrector at the M. P. Ponomarev Typography – they published educative and innovative books of the epoch of Enlightenment in Moscow, than in Vladimir. For Novikov he translated works by P. Marechal and F. Fenelon. He was also under strong influence of archeographer and historian N. N. Bantysh-Kamensky. Having returned to Voronezh, E. taught in the local seminary and actively participated in foundation of a typography. After the death of his wife and three children, he became monk and was invited to St. Petersburg (1800). Being an active supporter of the Enlightenment ideas, he participated in reforming of spiritual schools. At the same time, he was strongly against the activity of the Biblical Society in Russia, because he was sure that the Russian Biblical Society could existed in the system of the Synod only.