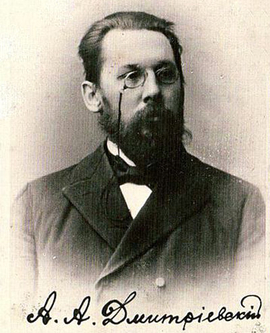 He graduated from the Astrakhan’ Spiritual Seminary; since 1878, he studied at the Kazan’ Spiritual Seminary. Since 1882, he made lectures in Homiletics and Liturgics at the Samara Spiritual Seminary. In 1883, he defended his Master thesis in Theology ‘Liturgy in Russian Church in the Sixteenth Century. Part I: Services of the Week and Year Circle, and the Sacramental Rites’. In 1884, he moved to Kiev, where he got a position of Prof. of Ecclesiastic Archeology at the Kievan Spiritual Academy. Since 1886, he traveled in Sinai, Athos, Jerusalem, Athens, and Italy. In the course of his travels, he studied liturgical manuscripts at the Athos monasteries and in the library and archive of the Sinai St. Catherine Monastery. In 1895, he defended his Doctor thesis in Ecclesiastic History ‘A Description of Liturgical Manuscripts Preserved in the Libraries of the Orthodox Orient. Vol. 1, part 1: Monuments of the Patriarchal Rules and Ktetors’ Monastic Typicons’.

In 1906, D. moved to St. Petersburg, where – on the order of the Synod – he took part in the work of the Commission for Correction of the Slavic Text of Liturgical Books. He also took part in the activity of the Imperial Orthodox Palestinian Society, and in 1907, became its Secretary. In 1918, he moved to Astrakhan’, where he became Prof. of Greek Language at the local university.

In 1922, D. was arrested and accused in his counteraction against the expropriation of church treasures; he got a conditional sentence. In 1923, the Astrakhan’ University was closed, and D. returned to Petrograd, where he made lectures in Liturgics at the Theological Courses, and took part in the activity of the Russian Byzantine Commission of the Ac. of Sc. He died in 1929, and buried at the monastic cemetery of the St Aleksander Nevsky Lavra.