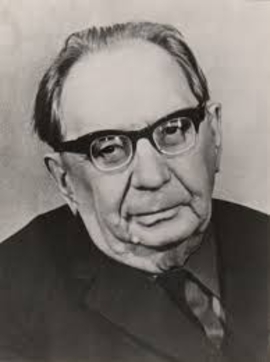 After the gymnasium in Saratov (with a silver medal), in 1912, he entered the Historical and Philological Faculty of the Moscow University. In 1918, he graduated from it with the diploma work ‘Zharty and Facetiae of the Seventeenth – Eighteenth Centuries’. Took part in folklore and ethnographic expeditions. Member of the Moscow Linguistic Circle. In 1918-1919, Employee of the Library Department of the People's Commissariat for Education.

From 1921 to 1939, he worked in the Soviet Embassy in Czechoslovakia as Assistant and translator. He was a member of the Prague Linguistic Circle (1926). He wrote reviews and articles for the ‘Central Europe’ Magazine. In 1930, at the Charles University (Prague), B. defended his PhD thesis ‘Magical Actions, Rituals, and Beliefs of Transcarpathian Rus’. He taught at the Bratislava A. Komensky University (1931-1933), as Ass. Professor (since 1937). He was invited to the University of Münster (Germany), to the Center for the Study of Slavic Cultures and Slavic Languages, where he made lectures in 1931-1933.

In 1922-1939, he was engaged in expeditions to Transcarpathia and in Slovakia. In 1928-1939, as an employee of the Literary Museum (Moscow), on behalf of its Director V.D. Bonch-Bruevich, he collected materials for the Museum in the archives of Czechoslovakia, Austria, Germany, and Denmark.

In 1939, he returned to Moscow. Since 1940, Professor of the Moscow Institute of Philosophy, Literature and History, Head of the Department of Folklore (MIFLI became a part of the Moscow State University in 1941). Doctor in Philology, his thesis was on the Czech folk theatre (1941). In 1943-1948, Head of the Folklore Sector of the Institute of Ethnography of the Academy of Sciences of the U.S.S.R.. In 1948, during the ‘struggle against cosmopolitanism’, he was fired out from the Institute and removed from teaching at the Moscow State University. From 1952 to 1959, he was Professor at the Voronezh University.

In 1958-1963, he was Senior Researcher at the Institute of World Literature and Art of the Academy of Sciences of the U.S.S.R. Since 1964, Professor of the Philological Faculty of the Moscow State University.

Honorary Doctor of the Charles University in Prague (1968) and the Bratislava A. Komensky University (1969).

For the history of religion, his studies of the symbolic nature of costume and mask in magic rites and folk theatre are of great importance.