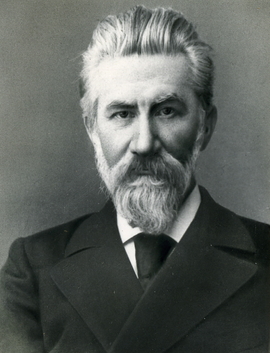 He finished the Fourth Larin Gymnasium (the 6th Line of the Vassilievsky Island, St. Petersburg) (1860) and entered the Historical and Philological Faculty of the St. Petersburg University, where visited lecture courses by N. I. Kostomarov, M. M. Stasiulevich, I. I. Sreznevsky, V. A. Sukhomlinov, and at the same time – by zoologist Kutorgy. In 1861, A. had to go abroad for some health reasons, there he met A. I. Herzen. In 1863, A. entered the Natural Sciences Department of the Physical and Mathematical Faculty of the Moscow University; one of his supervisors there was anthropologist A. P. Bogdanov. In 1876, A. was sent abroad to prepare himself for the Chair of Anthropology; he trained himself at several European universities, in museums of Wien, London, Berlin, and Munich. The longest period was in France, where A. took part in the archeological excavations in some caves, studied dolmens and etc.; he visited lectures at Sorbonne, worked at Ecole d'antropologie with Paul Broque. At the World Exhibition in Paris A. created the Russian anthropological section. Since 1880, he has got position of Docent at the Chair of Anthropology of the Moscow University. Since 1884, he has been Professor at the Chair of Geography and Ethnography of the Historical and Philological Faculty.

The circle of interests of A. was immense; it seems impossible to be done by one man: he worled in the fields of zoology, geography (he is a founder of Russian limnology), archeology, anthropology (both physical and cultural ones), the theory of evolution (a significan part of works in that sphere, published in Russia since the late nineteenth century, have been edited by A.). He stood for inter-disciplinary research; he was sure it would be impossible to study humans without taking into account all factors of their functioning, including geographical, economical, religious and so on. From this point of view, his work ‘On the Tasks of Russian Ethnography’ is of special interest; the author formulated a program of development for the Russian ethnographical discipline, including archeology, anthropology, and geography, centered at thecomplete studying of humans – from the primordial times, shaping the ‘natural history of human being’. A. paid great attention to studying semantic of objects and treated it as a serious tool for the reconstruction of religious beliefs.