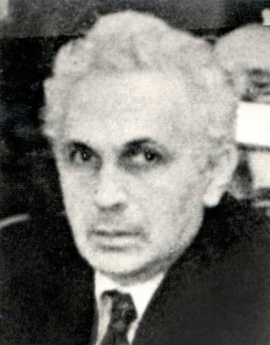 The family moved to Baku in 1906. In 1914, A. finished the Second Bakinskaya Gymnasium with a silver medal (excellent in all disciplines, except Latin, and there were no Greek in the gymnasium). In the course of that learning he was enchanted with philology. In 1914, A. entered at the Physical and Mathematical Faculty of the Kievan St. Vladimir University, than he transferred to the Medical Faculty. In 1917-1919, A. was an active participant of fighting for Soviets in the Ukraine, took part in taking Odessa. In 1919-1920, he worked at Soviet newspapers in Chernigov, but did not enter the party in spite his admiration for the Soviets. In 1920, A. returned to Baku and entered the Historical and Philological Faculty of the Azerbaijan University. In parallel with his studies, A. worked for the Caucasian Dep. of ROSTA (propaganda and advertising agency), and for the ‘Krasnyi Iran’ Newspaper, taught Russian literature in a secondary school, took part in the campaign for liquidation of illiteracy; in 1923, he became Secretary of the Azerbaijan People’s Commissariat for Education (Narkompros).

By November 1920, he made an acquaintance with Vyach. I. Ivanov (in 1920-1924, Ivanov was Professor, and the Head of the Department of Classic Philology of the Azerbaijan University). Under his supervision, A. studied ancient languages and classic culture in addition to main, obligatory courses; he also made notes on their talks with Ivanov (publ. 1995). After the graduation from the university in 1923 with the diploma of the 1st degree, A. was invited to the Department of Classic Philology to prepare for scholarly research. In 1924, he was send to the Research Institute of Comparative History of Western and Oriental Languages. In 1924, he entered the post-graduate courses of that institute (supervision of B. L. Bogaevsky and N. Ya. Marr. In 1928, A. defended his thesis ‘Semantics of Proper Nouns in Classic Epos’ at the Leningrad State University. In parallel, in 1926-1929, A. worked at the Classic Section of the Japhetic Institute; in 1930-1937 he was Senior Researcher, and Member of the Institute of the History of Ancient World at the State Academy of the History of Material Culture. In 1939, he defended his Doctor’s thesis ‘Remnants of the Clan System in the Proper Nouns at Homer’ at the Leningrad State Teachers-Training Institute; than he got degrees of Docent and later Professor. Since 1929, he has been lecturer at the Leningrad State University and some other Leningrad

high schools. That time he started his deep research in the field of Russian literature of the nineteenth century.

In 1944-1945, he was Professor of the Irkutsk University; in 1945-1947, A. worked at the Faculty of History and Theory of Arts of the All-Russian Academy of Fine Arts (he had general and specialized courses in world and Russian literature). He also had a specialized course in classic mythology at the Historical Faculty of the Leningrad State University, actively participated in the Soviet social work. In 1947, he was fired out ‘because of the reduction of work’.

Since 1947, A. worked at the State Public Library (now the Russian National Library) as Chief Librarian of the Department of Systematization; he studied history of Russian literature of the nineteenth century. In 1950, he was reduced to the position of ordinary systematizer; in 1951, he was fired out; one year more he worked at the same library on temporary agreements. After it A. had to leave Leningrad; he worked at the Orel Teachers-Training Institute; since 1956, he has worked at the Tula Teachers-Training Institute. Having retired in 1959, he returned to Leningrad and up to the end of his life kept his studies and translated texts.

A.’s research works in the field of classic religion and mythology were marked with typical trends of his epoch: refusal from traditional historical and philological approaches, attempts to build new research methods; some conclusions were made under the influence of the intellectual climate of that time and the Soviet context of 1920-s – 1940-s, as well as the Russian cultural revolution of 1910-1930 in its multiple aspects.