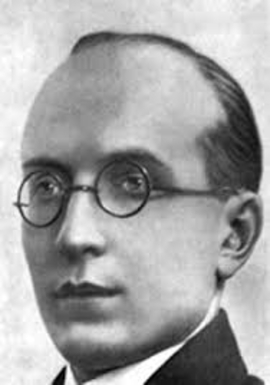 Graduate of the Social Pedagogical Department of the Faculty of Social Sciences of the Petrograd University, student of F.I. Shcherbatsky and B.Ya. Vladimirtsov. Since 1926, postgraduate student at the Research Institute for the Comparative History of Literatures and Languages of the West and the East named after A.N. Veselovsky at the Leningrad State University, employee of the Asian Museum, the Institute of Buddhist Culture and the Institute of Oriental Studies of the Academy of Sciences of the U.S.S.R., organized in 1930. From 1929, he was engaged in teaching at the Leningrad Institute of Living Oriental Languages and at the Leningrad State University. Every year (in the period of 1927-1932) he traveled to the Buryat-Mongolian Autonomous Soviet Socialist Republic, to the Aginsky datsan, where, with the participation of local lamas, he studied Buddhist texts in Tibetan language, and also collected a unique collection of Tibetan texts. In 1935, he got PhD in Literature without defense. In 1937, he was arrested, on September 26 of the same year he was shot on charges of anti-Soviet activity. In 1956, he was rehabilitated.

In 1931, he prepared for publication the work ‘On the Philosophy of Dharmakirti’; later, together with F.I. Shcherbatsky, S.F. Oldenburg, E.E. Obermiller, and B.V. Semichov, he was engaged in the translation of the treatise ‘Arthashastra’ by Kautilya from Sanskrit, wrote the monograph ‘Logic of Vasubandhu’ (after the arrest this manuscript disappeared), prepared for publication the consolidated text of ‘Kalachakra’ and its Tibetan translation (did not manage to translate into Russian and finish the comments on it), published the article ‘Bibliography of Tibetan Literature’, as well as the work ‘Chronicle of the Barguzin Buryats’ (together with N.N. Poppe), containing an essay on the history of the study of Tibet in Russia and the formation of a collection of Tibetan manuscripts and woodcut prints in the Leningrad branch of the Institute of Asian Peoples of the Academy of Sciences of the U.S.S.R.