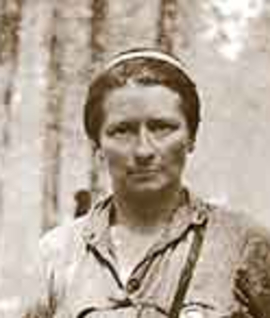 Vasilevich Glafira (1895—1971) – linguist, ethnographer, specialist in Tungus studies. She leant at the Petrovskaya Female Gymnasium in St. Petersburg. In 1913—1920, she worked at the Foreign Mail Department of the Main Post Office.

In 1921, she entered the Geographic Institute, Ethnographic Faculty (organized by L.Ya. Sternberg). She was among the first students of V.G. Bogoraz, and L.Ya. Sternberg sent to expeditions to Pechora (1923), and to the Vyatka Region (1924). In 1925, after graduating the Institute, she was sent to a business trip from the Leningrad Branch of the Committee of the North to work with Evenks and gathering ethnographic, and linguistic materials. She took part in 11 expeditions, where she studied language, folklore, social life, and Shamanism of Evenks.

She taught the Evenk language (since 1927), issued a large number of manuals, educative programs, and linguistic essays. Candidate in Linguistic (1935). She worked with the Museum of Anthropology and Ethnography, where in 1930, at the exhibition on the history of religion, she organized a part of ‘Soul after Death’. Since 1942, she has worked at the Institute of Ethnography of the Ac. Of Sc. of the U.S.S.R.

In 1952, she was arrested and accused on the article 52 of the Criminal Codex of the R.S.F.S.R. for ten years with the following limitation in rights for five years. She was sent to the camp in the Molotovo (Perm) Region. She was rehabilitated and got freedom in 1955, restored at her former position at the Institute of Ethnography.

Doctor in History (1969) on the sum of her works. In the same 1969, she published her fundamental study ‘Evenks: Historical and Ethnographic Essays (Seventeenth – Early Twentieth Centuries)’. At the same time, in her 74 years, V. took part in the last expedition, it was two years before her death.