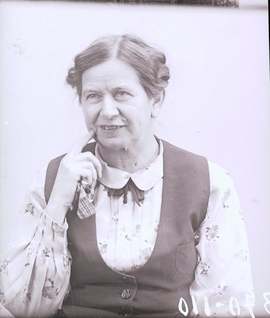 In 1915-1919 ‒ clerk in the office of plants of the Donetsk Yurievsk Metal Society.

In 1919-1921 ‒ bookkeeper at the State Trust of Petrograd plans of mass production.

In 1921-1925 ‒ student of the Arabic Department of the Petrograd Institute of Living Oriental Languages.

In 1924, she took part in an expedition of the Leningrad State University to the Vyatka Gov. for social and economical research. In 1926, she spent more than three months in the same region, collecting materials on the local cottage industry; in 1927, she made economical and ethnographical survey of the Tiumen’ District.

In 1925-1929 ‒ student of the Ethnographical Department of the Geographical Faculty of the Leningrad State University.

In 1928-1930 ‒ Researcher at the Leningrad Branch of the Society of Local History on the Finnish-Ladoga isthmus; she took part in several expeditions.

She made expedition work and collected data in the Caucasus, among Germans of the Volga Region, Russians, Estonians and Finns of the Leningrad Region. Her collections are kept in the Museum of Anthropology and Ethnography, and in the State Museum of Ethnography of the Peoples of the U.S.S.R.

In 1933-1963 ‒ Junior Researcher of the Department of Europe and the Caucasus, then of the East Slavic Sector of the Leningrad Branch of the Institute of Anthropology and Ethnography of the Ac. of Sc. of the U.S.S.R.