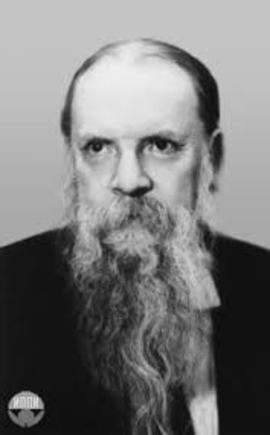 Tolstoy Nikita (1923–1996) – linguist, folklorist, ethnographer, Academician of the Academy of Sciences of the U.S.S.R. (1987), Professor at the Moscow State University. The main sphere of interests: linguistics, Slavic philology, ethnolinguistics, paleoslavistics.

In 1941, he graduated from the 1st Russian-Serbian male gymnasium in Belgrade. In 1945, together with his parents, he came to the U.S.S.R. and entered the Philological Faculty of the Moscow State University, specialty ‘Bulgarian language’. His supervisor during the work on the diploma paper ‘The preposition of OD in the Macedonian language’ was a specialist in the Church historian (Old Believers), linguist, Slavist Academician V.V. Vinogradov. In 1953, T. graduated from the post-graduate course, having defended his PhD dissertation ‘Short and Full Forms of Adjectives in the Old Church Slavonic’ (under the supervision of linguist, specialist in geographical linguistics, Prof. S.B. Bernshtein) and was employed at the Institute of Slavic Studies of the Academy of Sciences of the U.S.S.R. In 1972, he defended his doctoral dissertation ‘Experience of Semantic Analysis of Slavic Geographical Terminology’ (Moscow, 1972. Vol. 1-3. 923 p.). Beside his work at the Academy of Sciences, he also taught at the Philological Faculty of the Moscow State University.

Encyclopedic knowledge allowed T., using the interdisciplinary approach, to engage in the ‘archeology of culture’, studying folk religiosity, mythology, and culture with the help of linguistic, regardless of the nature of the analyzed sources (folklore, objects, rituals). Thanks to his efforts, a school of Slavic Ethnolinguistics was created in the U.S.S.R. That school arose not only on the modern methodology of humanitarian research, but also on the extensive material of field research, which arose thanks to ethnographic and dialectological expeditions, where T. took part himself until 1986. With his participation, the publication of the magazine ‘Zhivaya starina’ (Living Antiquity) was revived, and he was its Editor-in-Chief. Also, on his initiative, the ethnolinguistic dictionary ‘Slavic Antiquities’ was prepared and published, it contained a lot of information about ceremonies, rituals, and religious beliefs of Slavs.