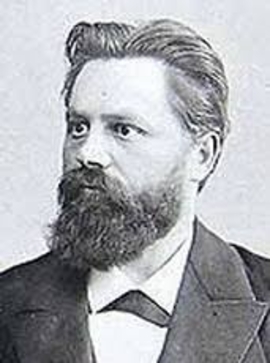 Tokarsky Ardalion (1859–1901) – Russian psychiatrist, one of the founders of experimental psychology in Russia.

He was born in the Saratov Province, in the Balanda Settlement (now Kalininsk); in 1880, he graduated from the First Saratov gymnasium and entered the University of Dorpat (Tartu); in 1881-1885, studied at the Medical Faculty of the Moscow University. After successful graduation, he got training at the psychiatric clinic of Moscow University; in 1889-1892, he had internship in Germany and France with the largest European doctors and psychologists of that time: G. Helmholtz, W. Wundt, J. M. Charcot, and I. Bernheim. In 1893, T. became Doctor of Medicine, having defended his thesis. Since 1895, Ass. Professor of the Medical Faculty and Head of the Laboratory of Nervous and Mental Diseases at the Moscow University. T. was member of the Editorial Board of the magazine of ‘Voprosy filosofii i psykhologii’ (Issues of Philosophy and Psychology), one of organizers of the Moscow Society of Neuropathologists and Psychiatrists, and member of the Moscow Society of Psychologists. He lost a chance to become the head of that society because of his early death from tuberculosis in 1901.

He was actively involved in the studying of hypnosis and suggestion, so popular in psychiatry at the time, which was the subject of his 1888 work ‘Hypnotism and Suggestion’, published first in the magazine of the ‘Archives of Psychiatry, Neurology and Forensic Psychopathology’, and then as a separate book. That work by a young psychiatrist attracted attention, and T. was invited to the city of Kyakhta in Buryatia to conduct therapeutic hypnotic sessions. During a trip to the Siberian wilderness, he collected valuable materials for the study of one specific state (meryachestvo), later known as the polar or arctic disease, which formed the basis for T.'s further dissertation. On the same trip, he also observed the ‘rite with an arrow’, a description of which under the title ‘A Spell with an Arrow of Tibetan Lamas’ T. published in the magazine of ‘Voprosy filosofii i psykhologii’ (Issues of Philosophy and Psychology) in 1894. In the article ‘The Origin and Development of Moral Feelings’, published in the same magazine in 1895, T. argued that religious feeling, like moral feeling, arose from the natural milieu. In fact, T. pointed to empathy as the basis of morality, and in this he was well ahead of his time.