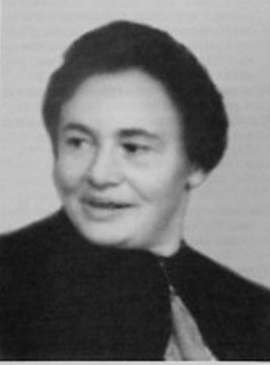 After finishing secondary school in 1930, she entered a road technical school; in 1932, quitted it and started to work as technical drawer in a project institute. In 1934, she entered the newly organized Historical Faculty of the Moscow State University. After its graduation in 1939, she stayed at the post-graduate courses, at the Chair of the Ancient World (supervisor N. A. Mashkin).

In 1942, she defended her Candidate thesis ‘The Crisis of the Third Century in Gallia and Africa’. In 1942-1944, she worked at the Lenin State Library; in 1944, she transferred to the Institute of the History of Material Culture (later – Institute of Archeology of the Ac. of Sc. of the U.S.S.R.).

In 1950, she transferred to the Institute of History of the Ac. of Sc. of the U.S.S.R.; there she worked till the end of her life.

In 1957, she defended he Doctor thesis ‘The Crisis of the Slavery System in the Western Provinces of the Roman Empire’.

In the field of the history of religion there are her important works on religion of Ancient Rome, on religious and moral views of the low classes.