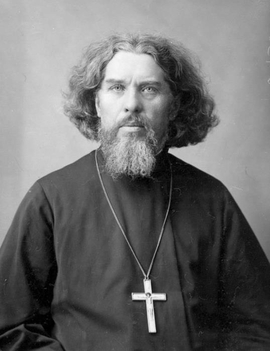 In 1879, he graduated from the Simbirsk Spiritual Seminary; in 1884 – the Kazan’ Spiritual Academy and got the rank of priest, and in 1896 – Archpriest.

In 1888, he defended his Master thesis in Theology ‘The Book of Enoch’. In 1900, he got the Doctor degree for his thesis ‘Messianic Expectations and Judaic Beliefs about the time of Jesus Christ’. He studied and translated the Old Testament apocrypha (The Book of Jubilees; Testaments of the Twelve Patriarchs; and others).

Deputy of the IV State Duma from the Kazan’ region (1921); in the Temporary Government he was Deputy Procurator of the Synod.

Professor of the Chair of Orthodox Theology (1915-1918) and Rector of the St Peter and Paul Church of the St. Petersburg University. In the late May 1918, he moved to Samara; since October 1, he retired.

In the Introduction to his ‘The Course of the History of Religions’, published by the Historical and Philological Faculty of the Kazan’ University in 1908, he described the reason, why various religions had not been studied before: because of the ‘religious intolerance’ to all non-Christian religions. He noted: ‘Religious verity could be the single one, and in all it completeness it could be manifested in Christianity; all other religions, especially pagan ones, are merely rude superstitions, which do not deserve scholarly studying – that was the point of vies, whish was accepted those times. Studying false religions seemed something sinful, a kind of treason to Christianity; they saw a danger for week and unstable souls, which as if could be enchanted with a killing lie of Paganism’ (The Course of the History of Religions. Kazan’, 1908, p. 1).

Opposite to the point of view existing in Orthodox theology in the second half of the nineteenth century – that the initial form of religion was veneration of the only God, which degraded transforming into pagan concepts and staying in such shape till the return to the lost true faith through the divine Revelation (Kudriavtsev-Platonov V. D. On the Single God as the Initial Kind of Religion of the Human Beings // Supplement to Compositions of Holy Fathers. 1857, part XVI, book 3, pp. 328-416; Chrysanthus (Retivtsev), Archimandrite. Religions of the Ancient World in Their Relation to Christianity. Vol. 1-2, St. Petersburg, 1873-1875; Inozemtsev L. Belief in the Single God, as the Initial Form of Religion. Moscow, 1881) – S. did not only declared the Animistic theory of the origin of religion by E Taylor, but also, quite carefully, evaluated the wide-spread opinion, that ‘non-cultural tribes’ had ‘a hazy’ idea about ‘the only high creature’ – as doubtful; he declared that ‘from the purely rational reasons’, it was hardly possible to expect ‘primordial pure faith’ in the single god (The Course of the History of Religions. Kazan’, 1908, p. 8). Describing Christianity, S. wrote not only about Orthodoxy, but about Catholicism and the main kinds of Protestantism. In the introduction to the part ‘Christianity’, he gave vast citations from D. Strauss and E. Renan on the historical significance of Christianity; he stressed that even those who lost faith acknowledge the great role of Christianity and Christ himself for the history of humankind.