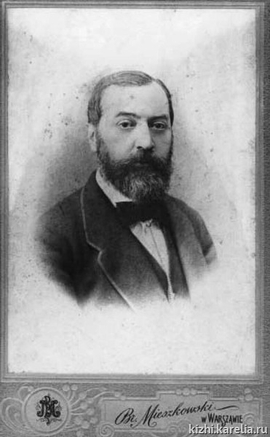 In 1858, he graduated from the Historical and Philological Faculty of the Moscow University. In his students years, he was connected with revolutionary groups ‘Vertep’ and ‘Zemlya i volya’. After the University, on the advice of one of the elder comrades, he went to the Chernigov Region to study Old believers and to fix folk songs. His activity disturbed local authorities, and R. was arrested before he returned to Moscow.

In the beginning of 1859, he was under the arrest in St. Petersburg, and then – sent to the Olonets Region, to Petrozavodsk, where he got a position of a small clerk at the Governor’s office (by 1862, he was promoted to Senior Clerk for Special Tasks).

Crossing the Olonets Region for his service tasks, R. collected material for his articles on ethnography, archeology, and folklore; he published them in the local media: ‘Olonetskie gubernskie vedomosti’ Newspaper, and in ‘Pamyatnye knizhki Olonetskoy gubernii’ Magazine. He found folk singers who knew many epic poetic tales (Leonty Bogdanov, Nikifor Prokhorov, Kozma Romanov, Ryabinin, Shcherbakov et al.). Bylinas, collected by R., were publishe initially in the ‘Olonetskie gubernskie vedomosti’ (1859-1860), and later – as a separate book in Moscow.

Thanks to the help of his friends, in 1866, R. got a permission to return to Moscow. There he found a job in Poland – a member of the Governmental Commission for Domestic and Spiritual Matters in Warsaw, then – Vice Governor in Kalish. In 1875, he became Actual State Councilor; later he retired.

In 1861-1967, in Moscow, four issues of his book ‘Songs, Collected by P. N. Rybnikov’ were published; they contained 224 texts of Bylinas, common-day tales, historical songs and other verses kept in the oral tradition.

He was a member of the Society of Adherents of Russian Literature at the Moscow University (1861), Russian Archeological Society (1863), and Russian Geographical Society.

In 1864, he got the Demidov Award and the golden medal for his collection of songs.