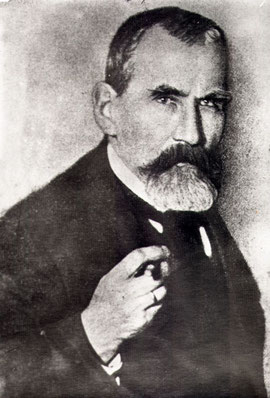 In 1877, after a classical gymnasium in Chernigov, he enrolled to the Kharkov Veterinary Institute; in 1878, he was excluded for his participation in students’ protests. He started his revolutionary activity in gymnasium years – as early as in 1874; in 1878, he entered the group ‘Zemlya i Volya’ (Land and Freedom). In December 1879, he was arrested, and on January 12, 1881, the Moscow Military District Court sentenced him to 15 years of had labour, but at the last moment it was changed with exile in the distant part of Siberia ‘with deprivation of all rights and property’. He arrived to Yakutsk in 1881; then he was sent from there to the First Igideisky Nasleg of the Boturussky Ulus (now Tattinsky Ulus), where he learnt Yakutian language. After a while, it became his life affair.

His research in the field of ethnography, folklore ad Yakutian language attracted attention of the East-Siberian Department of the Russian Geographical Society. He was invited to the Sibiryakov Yakutian expedition in 1894-1896; and in 1903, he received a task to make household census of Evenks of the Ayansky District. Studying the life of Evenks, he collected ethnographical materials for the Museum of Aleksander III (now – the State Russian Museum) in St. Petersburg.

In April 1907, he published the first issue of the ‘Dictionary of Yakutian Language’, composed by P.; the final. Thirteenth issue was published in 1930. Beside the works on the Yakutian vocabulary and folklore, P. wrote several dozens of works on ethnography and archeology.

In 1911, he was awarded with big golden medal of the Department of Ethnography and Statistic of the Russian Geographical Society for his works about Yakuts.