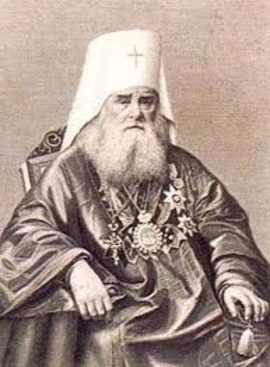 He graduated with honours from the Irkutsk Spiritual Seminary; there he got the surname Veneaminov to his father’s one (1814). He taught at the parish school. In 1823, he was appointed a missionary, and in 1824 with his family arrived at the island of Unalashka (Aleutian Islands); later, he was transferred to Sitha. He studied languages of the indigenous peoples of Alaska, as well as their traditional culture, and religious beliefs. Together with his assistants, he was engaged in translating liturgical texts into the languages of peoples of the North, compiled ethnographic and geographical descriptions of Alaska and the islands of Unalashkinsky Bay. After the death of his wife (1840), he took monastic vow and the name of Innocent. Since 1840, Bishop of Kamchatka, Kuril and Aleutian Islands; since1868 – Metropolitan of Moscow.

In his writings he paid attention to the study of religious ideas of peoples of the North; he was the first, who gave a scholarly description of religious rituals and beliefs of the Aleuts and Tlingits.