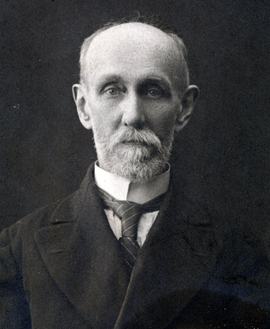 Kokovtsov Pavel (1861–1942) – specialist in Hebraic studies and Semitology, the founder of the St. Petersburg school of Semitology.

In 1880-1884, he studied at the Faculty of Oriental languages, at the Hebrew-Syrian-Arabic Department, under the supervision on D. A. Khvolson and V. R. Rosen. Besides, he visited courses of the Arabic-Persian-Turkish-Tartar Department, and studied Sanskrit at S. F. Oldenburg. Later, that Turk-oriented studying happened to be useful for him in the course of analyzing Syrian-Turkish inscriptions from Zhetysu (Semirechie), and his knowledge in Sanskrit came in handy at considerations on the theory by Joseph Halevy on the origin of the Indian writing.

After the graduation, K. studied written monuments from the collection of the Imperial Public Library. His first publication was dedicated to the description of Syrian and Ethiopian manuscripts from the collection of Reverend Porphyry Uspensky. He systematized and described the First and the Second Collections of Abraham ben Samuel Firkovich . Perhaps, that time on, his interest to the history of medieval Hebrew Philology and Hebrew-Arabic Literature was born. Just in the Firkovich collection he found a philological treatise by Ibn Barun which became the object of his Master thesis (1893). On the base of manuscripts of the Public Library K. introduced a number of compositions by leading persons of the Hebrew philology of the tenth-twelfth centuries.

His research of the Hebrew-Khazar Correspondence on the base of manuscripts from collections of Firkovich (Imperial Public Library), Taylor-Schechter (Cambridge University), the Bodleian Library (Oxford University) was of great importance. That correspondence was a principal source for the history of the southern regions of Rus’, and its cultural connections with other peoples.

He made a significant input into studying of Syrian-Turkish Nestorian funeral inscription of the thirteenth-fourteenth centuries found in Zhetysu (Semirechie). Hw also published Aramaic inscriptions from Nirab (seventh century BCE), some Hebrew inscriptions and epigraphic monuments from Palmyra. Thanks to his initiative, the Hermitage acquired the Palmyrian Custom Text.

His works on the history of Syrian writing were of great importance. He initiated studying Syrian manuscripts in St. Petersburg collections; he wrote several works on certain Syrian manuscripts of the Public Library. Besides, he studied and published Syrian inscriptions on a plate-discos from the Hermitage collection.

In 1894-1929, K. made lectures at the Faculty of Oriental languages of the Petersburg/Petrograd/Leningrad University. In 1900, he became Ass. Professor, and in 1912 – Full Professor of the Chair of Hebrew, Syrian and Chaldean Literature; he had that Chair in 1900-1919. He was far from political activity, but in 1913, he was an expert from defense in the Beilis Affair – he saw his duty as Semitologist in it.

The main teaching courses by K. were connected with the history of medieval Hebrew literature. North Semitic epigraphic, reading of the most complicated Biblical texts, Syrian, Old Hebrew, and Assyrian-Babylonian languages.

In 1919-1930, K. was Head of the Sector of Hebrew and Arabic manuscripts of the Manuscript Department of the Public Library; in 1930-1942, he was Chief Researcher of the Institute of Oriental Studies of the Ac. of Sc. of the U.S.S.R. He died in the Blockade of Leningrad.

The most part of his works has left in his archive and have been never published.