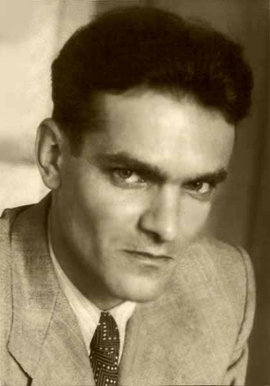 Knorozov Yury (1922‒1999) – Doctor in History, world-known ethnographer, linguist, translator; chevalier of the Order of the Aztec Eagle (Mexico), and the Big Gold Medal of the President of Guatemala, an honourable member of the Madrid Society for Mayan Studies, and the National Geographic Society of the U.S.A.

In 1948, after the graduation from the Historical Faculty of the Moscow State University, he worked in Leningrad, at the Museum of Ethnography of the Peoples of the U.S.S.R.; in 1953, he transferred to the Museum of Anthropology and Ethnography named after Peter the Great (Kunstkamera).

The world glory of Knorozov, as one of the leading specialists in the field of traditional culture of the peoples of the Central America, was connected with his achievements in deciphering the writing system of Maya. Using mathematical methods of deciphering, he attracted a group of researchers, who worked in the same way with Proto-Indian writing, and the writing of the Easter Island. Studying four hieroglyphic manuscripts of Maya, which were hold in spite the destroying the Mayan heritage by Spanish conquerors (Dresden, Paris, Madrid ones, and the Codex of Mexico), Knorozov translated them into Russian and made their textual analysis; it led Knorozov to the conclusion, that — in spite their seemingly shortness and monotonous style — those manuscripts contained various and rich material for understanding the spiritual, and material culture both classic and earlier Maya. He succeeded to prove that, from one hand, some parts of those manuscripts were based on the ancient tradition and reflected phenomena non-existing by the classic Mayan time; on the other hand, taken together, they form a kind of encyclopedia of various aspects of life of that people. Manuscripts were designed to be some reference guidebooks for countryside priests for the sake of correct conducting their rituals and moving festivals. The translation of those Mayan texts opened a broad perspective of studying Mayan religion (definitions of functions of various gods, their hierarchy, their connection with different layers of the Maya society, as well as with different professional, age, and gender groups), the calendar, the main types of activity and the ways of their economical life, their concepts of the afterworld and funeral rites.