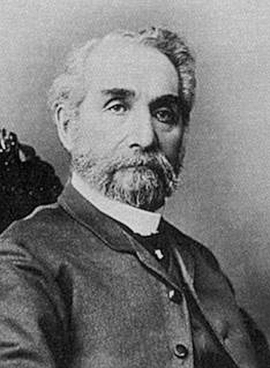 He got traditional Hebrew education, In yeshiva he secretly read non-recommended philosophical texts by Maimonides. By the age of 18, he learnt German, French, and Russian languages by himself and went to Riga on foot, and then to Breslau, where he became a disciple of a Reformist Rabbi and one of the founders of Wissenschaft des Judentums, Abraham Geiger. In four years Geiger helped Kh. to prepare for exams for the course of gymnasium and to enroll at a university.

In 1846, the first his articles on medieval Hebrew writers were published in German. At the same time he was interested in the issue of ‘Sabeans’ mentioned by Maimonides. In 1847, thanks to protection of influential scholars from Wien, Kh. worked with manuscripts, and by 1850, he made his fundamental thesis ‘Die Ssabier und der Ssabismus’. To return to Russia he had to ask for protection of Alexander von Humboldt, who introduce the young researcher to A. S. Norov – he became a patron of Kh. for many years.

In St. Petersburg, for a year, he worked at the Commission for correction of Hebrew manuals, but in the next 1855, he converted to Orthodoxy (patronymic ‘Avraamovich’ was taken from the name of A. S. Norov). After it, Kh. got a position of Professor at the Oriental Faculty of the St. Petersburg University, at the Chair of Hebrew, Syrian, Chaldean literature, which he kept till his death. In 1858-1884, he got the Chair of Hebrew and Biblical Archeology at the St. Petersburg Spiritual Academy; and in 1858-1883, he taught Hebrew language at the Roman Catholic Academy in St. Petersburg. In 1856, he was elected Correspondent Member of the Ac. of Sc.

He was a founder of St. Petersburg school of Semitic studies. His works were published in German and Russian in original author’s versions; there are also translations of some of his works into German, English, and Hebrew.

The sphere of his interests was rather broad; and all his works are connected in various forms with the problems of the history of religion. In the field of studying literature of Near East, Kh. attracted new sources and made brave conclusions on their base (for instance, veneration of Tammuz he interpreted in the euhemeric way as deification of historical prototype). In the discussion on the collection of A. Firkovich, his opponent was A. Yu. Garkavi. On the order of the Ac. of Sc., Kh. studied Nestorian monuments found in Semirechie, collected and published oriental sources for the history of the peoples of Russia.

In his religious studies there are two main cycles. The first one was connected with the fight against the ‘blood libel’ and anti-Jewish superstitions. He wrote several texts in the frames of judicial work for the sake of accused at the process inspired by the Tsar’s authorities. The second cycle was quite various in topics but unified by methodology: Kh. was one of the first researchers who based on systematic knowledge of the Rabbinic tradition (Mishna and Gemara) in his studying the New Testament sources.

In spite of his conversion, Kh. did not separate himself from the Jewish people and regularly participated in various projects for enlightening and protection of Jews of the Russian Empire.