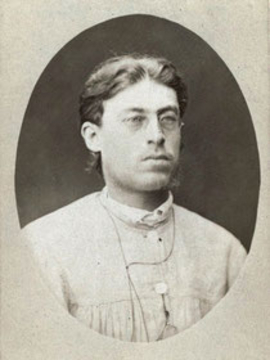 He graduated from a vocational school in Nikolaev and entered the Novorossiysk University in 1875. He was engaged in literary creation (Collection of articles ‘Thoughts of Provincials’, 1876) and amateur theatre as actor and director. Since 1877, he took part in the revolutionary movement, member of the society ‘Land and Freedom’. In 1878, in Odessa, during the arrest of an underground printing house, he came into conflict with gendarmes and was wounded. He was sentenced to six years of hard labor, the first four years he served in the Kariysk penal servitude, where, in 1882, he participated in the preparation of the ‘escape of eight’. Later, he wrote memoirs published in the magazines ‘Byloe’ (1906-1907), ‘Our Country’ (1907), ‘Years Past’ (1908), ‘Voice of the Past’ (1914).

In 1883, he was sent to a settlement in Yakutia (Baturinsky Ulus). He started to study the life and religious customs of Yakuts. He was a member of a special commission to improve the land life of Yakuts, despite the fact that he was a ‘state criminal’, he was admitted to the official work of the statistical committee of the Yakutsk District. In 1895, he took part in the expedition of the East Siberian Department of the Russian Geographical Society to “clarify the living conditions of alien-born” of the Yakut Region, organized by the gold miner I.M. Sibiryakov. In 1896-1897, he worked as the head of the search party of the Aldan Expedition of the ‘Russian gold mining society’. The result of ethnographic research by V. was in research publications in the magazines ‘Memorable Books of the Yakutsk Region’, ‘Siberian Collection’, ‘News of the East Siberian Branch of the Geographical Society’, etc., as well as essays and stories. He was considered by D.A. Clements as his teacher. An article about him has survived in the manuscript (1908–1914) ‘D.A. Clements. (In the memory of the teacher)’ (Russian State Archive of Literature and Art. Coll. 92. Descr. 1-2.) He was the curator of the Yakutsk Museum, organized in 1887, in the creation of the collections of which many political exiles took part, including V., V.I. Yokhelson, E.M. Yaroslavsky, and others.

In 1897, he returned from exile, first to Kherson, where he worked as statistician of the zemstvo council, then moved to Nikolaev, where, together with F.Ya. Kohn, he edited the newspapers ‘Nikolaevskiy Courier’, and ‘Yuzhnaya Rossiya’. In 1906, as a member of the Socialist Revolutionary Party, he was arrested in St. Petersburg and sentenced to exile to Siberia, which was replaced by deportation abroad. He lived in Geneva. He returned to Russia in 1918, worked as proofreader in publishing houses. He died from illnesses acquired in his prison years.