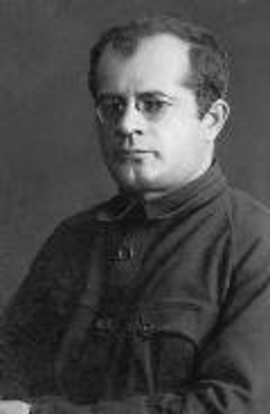 He learnt at the gymnasium of the town of Mogilev, the Mogilev Province (since 1907), learnt by himself as well. In 1910, he assigned to the Moscow University. In 1918, he moved to the town of Morshansk, where he worked as lecturer of the People’s Commissariat for Education (under the pseudonym of M.N. Putintsev).

In 1920, he returned to Moscow, where he was arrested for the first time; he was under the arrest till 1922. Since mid-1920-s, he has worked for various newspapers, and magazines, including those of the League of Militant Atheists, ‘Bezbozhnik’ (Atheist) Magazine, and ‘Ateist’ Publishing House, and also he wrote as historiographer, bibliographer, and translator. His main pseudonym was Ya. M. Glan.

In November 1939, he was arrested for the second time, and accused on the article 58 of the Criminal Code for five years of camp; he was sent to the Karlag (Kazakhstan). In 1944, he got freedom, in 1946 only, he was able to go out of the Karlag zone. He worked in the town of Kashin, Moscow Region. In 1949, he was arrested for the third time, and sent for ten years to the camp in Taishet. He got freedom in 1956, later he was rehabilitated.

For the ‘Ateist’ Publishing House he translated works by the most important authors in the sphere of the religious anthropology (J. Frazer, E. Tylor, L. Levy-Brule). The book ‘The Primitive Culture’ by E. Tylor was published in Russian without the name of the translator, because he was under the arrest. According the information of his relatives, on the same reason, the book ‘The Origin of Religion’ (Moscow, 1940)  was published with the name of only one of the translators, V.C. Nikolsky, without mentioning of G. Nowadays, the annotated bibliographical index of the Soviet antireligious literature of 1917—1932, compiled by G., is of an importance for specialists.