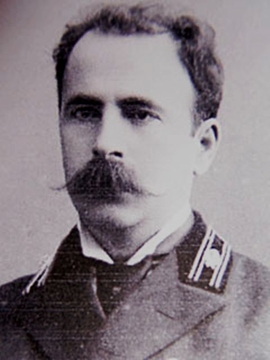 He was born in an Orthodox Syro-Arabic family in Jerusalem. The initial education he got in two Greek monasteries (in Lebanon and Palestine). In 1880-2, he studied at the Nazareth Seminary opened by the Imperial Orthodox Palestinian Society; for the excellent results he was sent to Russian, to the Vifanskaya Seminary (1889-1892), then in the Moscow (1892-1895) and Kazan’ (1895-1896) Spiritual Academies. An important role in his following destiny was played by Orientalist and Missionary, teacher of the Kazan’ Spiritual Academy M. A. Mashanov. He recommended J. for the Chair of Arabic Language, History and Criticism of Islam. In 1896, J. started to teach Arabic language at the Kazan’ Spiritual Academy; since 1899 – French language, as well.

In 1897, for his Master thesis, he travelled to Egyot; in Cairo he worked with some Arabic manuscripts and developed his knowledge of Muʿtazila. His thesis ‘Muʿtazila: Dogmatic and Historical Research in the Field of Islam’ was highly evaluated by M. A. Mashanov; it gave J. a chance to get his Master degree in 1899. In that work he explained the reasons of shaping the Muʿtazila movement, described the main steps of its evolution, shown its influence at other philosophical trends in the Near East and stressed the importance of the research in that field. For a long time, it was the only work in Russia on Muʿtazila. But not all the colleagues took positively the work by J. So, Professor of the Kazan’ Spiritual Academy E. A. Malov criticized the work for the absence of polemic against Islam; because J. argued that the way to overcome Islam would be in the dissemination of enlightenment and education based on Christian principles among Moslem population, not by force and not through the propaganda OF Christianity as a more perfect faith. His approach to the Anti-Moslem polemics, and the lack of polemical attitude in his works, prevented J. from further work at the Kazan’ Spiritual Academy. In 1916, he was invited to the Kazan’ Universityto make a course of lectures on the Moslem Law. He specialized in the history of Moslem law, common law among the Moslem population, and the history of Caliphate.

The scholarly interests of J. could be seen in his work ‘Position of Christians in Moslem States’, published in the magazine ‘Pravoslavnyi sobesednik’. In that text, initially a lecture, which he had made in Kazan’, he analyzed the sad destinies of Christians of the near East under the Ottoman Turkey. He used historical legends and tales demonstrating the slavery position of Eastern Christians, and their hard life; he considered that only the Russian Empire could fulfill its mission and liberate Christians from Turks. He published more than 30 works about Christian East.

In the early 1920-s, J. was invited to the Baku University; and he played a significant role in the shaping of the school of Oriental Studies in Baku. He became the first Dean of the Oriental Faculty of the Baku University (in 1922, he was transformed into the Azerbaijan University), and he stayed at this position till 1926. From Baku he made several travels to the Near East. But during that period he stopped his research in the field of Islam and Christianity and concentrated at the history of Azerbaijan and Transcaucasia in the Middle Ages. He put a special attention at compositions by Arabic historians, which could serve as sources for the history of the Caucasus and Transcaucasia.