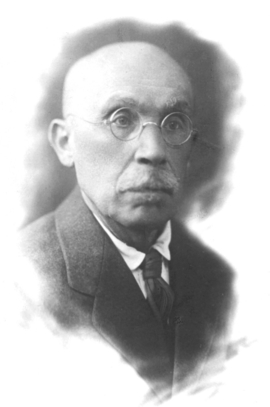 In 1886, he finished the Second St. Petersburg Gymnasium; in 1890, he graduated from the Historical and Philological Faculty of the St. Petersburg University. In 1898, he defended his Master thesis ‘From the History of the Athens, 229-231 BC’; and in 1903, – his Doctor thesis ‘ΑХАIКА. In the Region of the Ancient Province of Achaea’. Since 1891, he worked at the University; since 1899, he became Ass. Docent; since 1904 – free-lance Professor of the Historical and Philological Faculty; since 1913 – Full Professor; then – till 1927, he was Professor of the Faculty of Social Studies/Faculty of language and Material Culture. In 191801919, he was Dean of the Faculty and Rector of the University. Since 1914 – Correspondent Member of the Ac. of Sc.; since 1927 – Academician. Since 1919 – Actual Member of the State Academy of the History of Material Culture. Since 1891, he taught in various high schools of St. Petersburg/Petrograd. In 1933, he returned to the Leningrad State University, and also he made lectures at the Leningrad Institute of Philosophy, Literature and History. He died at the Blockade of Leningrad.

His conceptions were shaped under the influence of the school of F. F. Sokolov. As a student, together with M. I. Rostovtsev and Ya. S. Smirnov, Z. founded a group of the ‘fact-venerators’, or adherents of ‘material antiquity’ based on studying archeological data and monuments of art. Working out certain plots of Attic and the Black Sea coast history, he based, first of all, on the epigraphic material and data of archeological excavations. In the second part of his life, Z. translated classical texts into Russian.

In 1927-1931, he was politically harassed, and fires off the University. In 1932, he published the article ‘The Last of Paerisades and the Scythes Uprising on Bosporus’ (it was republished several times), where he – on the base of a rather shaky and extremely scientifically vulnerable interpretation of the decree in honor of Diophantus (2nd cent. BCE), he came to the conclusion about an uprising on Bosporus, headed by Scythe Saumakus against the Bosporus Tsar Paerisad. In the context of the first half of 1930-s, that interpretation of an inscription corresponded with a declaration by Stalin about ‘the revolution of slaves’, made at the Congress of Kolkhozniki-Udarniki (hard-working peasants) in 1933. After the death of Z., that uprising was interpreted as an example of brave reaction of Scythes, the local population, against the Greek invasion. The version by Z. was refuted in the U.S.S.R. by S. Kotsevalov (1937) and S.Ya. Luria (1948), and abroad by M. I. Rostovtsev (1940), bur was kept in official Soviet history till the late 1980-s.

He was the author of more than 250 works. In 1920-s – 1930-s, the research activity of Z., one of the few scholars of elder generations, who was actively involved into the work of early Soviet institutions, played a great role in protection of traditional knowledge, based on the real sources and philological analyses – opposite to the narrow interpreted sociological approach. For the history of religion his chapters on the classical priests and festivities of the Imperial cult in the province of Achaea, from his Doctoral thesis, his work ‘Religious Healing in the Ancient Greece’, and some other texts on various aspects of the classical culture and history were of special importance. He also made two significant inputs into the history of the Early Christian literature in the U.S.S.R.: there were his articles on the Gospels and on the Messages by Apostle Paul, where he popularized the critical ideas of Western scholars.