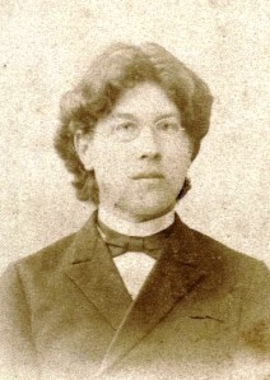 He was born in the family of a priest; in 1896, he graduated from the Kostroma Spiritual Seminary; in 1897-1902, he worked as a teacher of the Semilovo Parish school of the Kostroma District. Since 1902, he was Actual Member of the Kostroma District Archive Commission, worked at the shaping of the museum, collected the dialectological and folklore material. Since August 1902, during a year, he was a secretary of Academician A. N. Pypin; he collected exhibits for Emperor Aleksander III in St. Petersburg. In 1905, with the recommendation of Pypin, he enrolled to the St. Petersburg University, and at the same time started to work as a secretary of the Department of Ethnography at the Russian Geographical Society, and as an editor at the ‘Zhivaya starina’ Magazine. During the First Russian Revolution 1905-1907, he collected leaflets of various political parties, served at the Russian Museum named after Emperor Alexander III, participated in the work of archive committees, and prepared the 4th Regional Archeological Congress in Kostroma (1909).

In 1909, he was caught stealing from the museum collections, head to quit the University and went to Kostroma. There he became Special Clerk at the Liberal Governor P. P. Shilovsky, and participated in preparations for the 300th anniversary of the House of the Romanovs in Kostroma – including publishing special editions and materials, organizing a the Romanovs Museum in Kostroma. In 1916, he became a student of the Moscow University, where he took part in the work of the Society for Anthropology and Ethnography, published articles at the ‘Izvestiya’ of the Department of the Russian Language and Literature of the Ac. of Sc. In 1918, he returned to the vil. Sel’tso-za-Vorzheiu of the Kostroma Dist.; there he became a priest and took his father’s place. At the same time, he worked for the Exhibition and Excursion Section of the local educational committee, was a correspondent of the ‘Krasnyi mir’ (Red World) Newspaper, which belonged to Communists. In 1920-s, he refused from the rank of a priest and kept working for media. On November 14, 1925, he was arrested for stealing from archives and museums; in the spring 1926, he was sent to the Solovki Camp, there he got freedom ahead of time and enrolled at the service at the OGPU, as Research Secretary of the Solovki Local History Museum. He studied the labyrinths of the Solovki Islands, organized the work of the museum. Since 1932, he was Researcher of the ‘Kivach’ Nature Reserve, he became Actual Member of the Karelian Research Institute. He studied the revolutionary history of Karelis, worked at the Karelian encyclopedia, made several reference books, participated in the activity of the Karelian State Museum. In 1938, he was arrested and shot by Petrozavodsk.