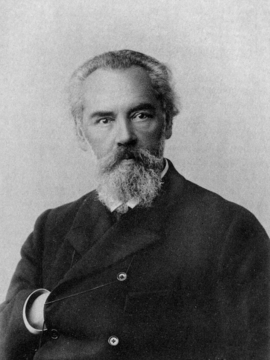 Veselovsky Aleksander (1838–1906) – historian, literary theorist, folklorist; Honourary Professor of the St. Petersburg University, Academician (1881); Head of the Department of Russian Language and Literature of the Ac. of Sc.

In 1854, he enrolled to the Historical and Philological Faculty of the Moscow University, where he visited classes of P. I. Kudriavtsev. His Master thesis ‘Villa Alberti, New Materials for the Characteristic of Literary and Social Turn in Italian Life of the Fourteenth – Fifteenth Centuries’ (1869) was initially published in Italian. His Doctor thesis ‘From the History of the Literary Communication between the East and the West: Slavic Tales on Solomon and Kitovras, and Western Legends on Morolf and Merlin’ (1872). He was interested in comparative historical studies of monuments of literature and folklore; he tried to establish the general principles of the historical-philological process. In 1860-s – 1870-s, he built a theory of evolution of poetry which was called by him ‘the historical poetic’. The main description of that theory was performed in the work ‘Three Chapters from Historical Poetic’ (1899); V. gave there a characteristic of primordial poetry, accenting such peculiarities as syncretism, chorus basic, and its connection with the rite. In the primordial poetry (mythology) he found the roots of the main types of poetry: epic, lyric, and drama.