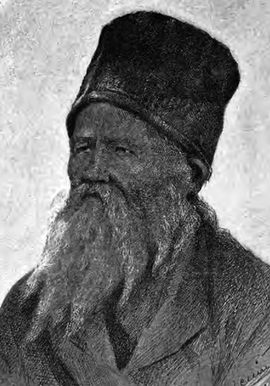 Verbitsky Vasily (1827–1890) – Missionary of the Altai Ecclesiastic Mission, linguist, ethnographer, specialist in Turkology, researcher of traditional culture of the peoples of Altai and Mountainous Shoria.

In 1846, he graduated from the Nizhny Novgorod Spiritual Seminary, then he taught at the parish school. Since 1854, in Siberia, he served as a priest at the travel mission church of All-Merciful Saviour in Ulala. He taught children the basic principles of faith, Russian reading and writing, and ecclesiastic singing. Since 1855, he made missionary travels to Altai, worked at various missions, and become the first researcher of ethnography and religion of the Mountainous Altai; he wrote much about the mythology, folk beliefs and life of the Altai people – and his works are still actual. Till the Revolution 1917, there were his 104 published works on the history, language, culture, mythology, religious beliefs and economical life of the Altai peoples. Much data about the indigenous people of the region are available now from his works only. He also studied local Altai languages and published ‘The Short Grammar of the Altai Language’ (edit. N. I. Ilminsky; 1869), and then ‘The Dictionary of the Altai and Aladag Dialects of the Turkic Language’ (Kazan’, 1884).