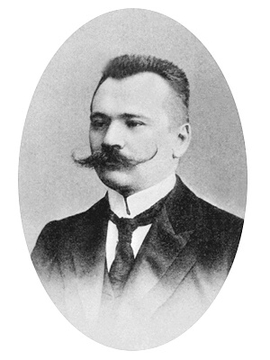 In 1887, he enrolled to the Department of Arabic East, but then – on the recommendation of his supervisor V. R. Rosen – transferred to the Historical and Philological Faculty of the St. Petersburg University, to the famous Byzantinist V. G. Vasilievsky. He studied oriental languages (Arabic and Turkish), as well as classical ones (Greek and Latin), and history. The main his interest was in the Arabic-Byzantine relations. In 1897-1900, he was in Paris with a scholarship of the Faculty. There he kept studying oriental languages (Arabic, Turkish, and Ethiopian). He wrote his Master and Doctor theses on the interrelations of Byzantium and Arabs: the first one was on the times of the Amorian Dynasty, the second one – on the Macedonian Dynasty. In 1902, together with N. Ya. Marr, he travelled to Sinai, to the St Catherine Monastery to study manuscripts of Agathias. In 1904-1912, he was Professor of the University of Dorpat (Yuriev, now Tartu). In 1912-1922, he was Professor and Dean of the Historical and Philological Faculty of the St. Petersburg/Petrograd Teachers-Training Institute. In 1912-1925, he was Professor of the St. Petersburg/Petrograd/Leningrad University. In 1919, he was elected for Correspondent Member of the Ac. of Sc. (in 1925, he was excluded). In 1925, with the support of famous specialist in classical studies M. I. Rostovtsev, he got a position at the University of Wisconsin (Madison) in the U.S.A. and went to the emigration. In 1925-1939, he was Professor, Head of the Chair of the Ancient History of the University of Wisconsin. In 1944-1953, he was Researcher of the Byzantine Research Center Dumbarton Oaks.