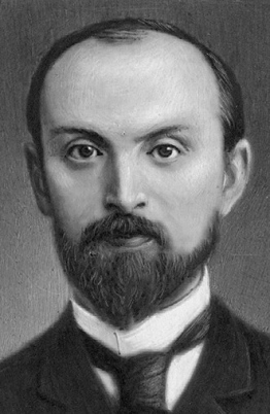 Turaev Boris (1868–1920) – orientalist: specialist in Egyptology, Assyriology, Ethiopic, and Semitic studies, founder of the national school of historians of the Ancient East.

He was born in the town of Novogrudok, learnt at the First gymnasium in Vilno. After graduation from the Historical and Philological Faculty of the St. Petersburg University he was invited to prepare himself for Professor position and sent to Germany for additional education (1891-1893). There he visited classes of O. E. Lemm, A. Ermann, G. Maspero, E, Schrader, and G. Winkler.

In 1904, he became Assistant Professor, and in 1911 – Full Professor of the St. Petersburg University. In 1919, he headed the newly organized Chair of Egyptology. On June 7, 1920, he was elected as Chairman of the Society for Studying Ancient Cultures.

Since 1912, he was Curator of the collection of Egyptian objects of V. S. Golenishchev, kept in the Museum of Fine Arts in Moscow.

He was known, first of all, as the author of the first Russian educative course in the history of the Ancient east (1896-1920). He based the course at the sources, which he read in original version, and regularly renewed it – using new sources and reconsidering problems. As a result, he covered an enormous territory from Egypt and Nubia in Africa up to the borders of Iran and India in the east.

IN the sphere of methodology, T. is known with his critic of Panbabylonism. Not less skeptical was he to the attempts of E. Meier to ascribe social-economical formations to the history of the Ancient East. In Egyptology T. is known as translator of religious texts and publisher of monuments of Russian collections of Egyptian artifacts. He shown himself as a keen historian of Ethiopian hagiography and Abyssinian political history, translator of liturgical books. His only research work in the field of Assyriology included a description of two economic tablets from the collection of the Ecclesiastic-Archeological Museum of the Ecclesiastic Mission in Kiev. He made a serious input into the studying of Phoenician literature. Books and translations of ancient oriental monuments by T. laid a foundation for Russian research vocabulary; he built principles of the translation style in the field of the Ancient East.

In spite of his sincere faith and active participation in the ecclesiastic life, in his studies T. kept ideas of evolutionism. In his Master thesis he criticized his predecessors, who tried to perform Egyptian culture as something lack of dynamics, and to analyze early religious conceptions through the much later testimonies of classical authors. He made an attempt to ‘trace back – on the base of available material – the historical evolution of Ancient Egyptian conceptions of god, who incarnated their culture, whose name was directly connected with the idea of truth and wisdom, and who – even in an alien outlook – survived the civilization, which had shaped him, for the sake of a broader role, and who is still reminding about it in literatures of younger nations’.

He strongly denied euhemerism which explained that Tot-Hermes was deified cultural person. Against it, T. used a vast specter of written and visual sources, structuring them in chronological order – from the name of god to mythology and cult, coming to Phoenician and Greek reinterpretations of the mythology of Tot in their literature. Later the same methods were used by almost all Russian researchers in their studies of myths and cults of the Ancient World.

His Doctor thesis was written under the strong influence of the work by V. O. Kliuchevsky on the Lives of Russian Saints. In it T. set a task to study Lives of Saint ‘in the

chronological order of the Abyssinian history, including both long versions, and short notes from Synaxarium, but excluding all texts of Abyssinian ecclesiastic poetry’. Hagiographic sources gave T. a chance to consider Ethiopian tales about saints as a complicated mixture of magic conceptions, liturgical canons, and literary tradition. Lives of Saints became for him a precious source of information on the political history of Ethiopia, and on the history of local system of education.

In his late works T. separated political conceptions of the deep antiquity from the prophetic movement of the Biblical epoch, although he did not deny a prototype of Israeli monotheism in the Egyptian Sun cult.

In general, his chronological approach to phenomena of religion, and his critical vies on any apologetic and anachronistic assertions on the culture were of great importance for the development of religious studies in Russia and in the U.S.S.R.