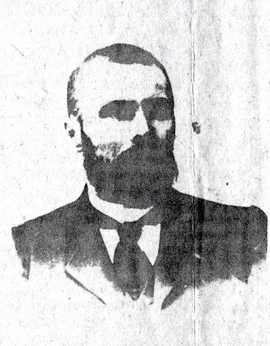 Before the Revolution 1917, he was Titular Councilor, served at the Main Administration of Post and Telegraph, later – at the Department of Trade and Manufactures of the Ministry of Finances (since 1896); then – member of managing body and one of the founders of the Society of East-Siberian cast iron plants.

In 1893-1894, on the order of the Ministry of Finances, he traveled to Persia, as a result he wrote a book about the economical situation in Persia. In 1905-1906, he lived in Sukhumi; there he was Chairman of the Sukhumi Society of Mutual Credit, City Magistrate. Then he moved to Tiflis, where he worked at the Tiflis Court Chamber and in private banks. When Soviets came to Tiflis, he moved to Abkhazia and worked there as teacher (1921-1922).

Since 1922, he was Professor of the Stalin Communist University of Workers of the East (it was founded in 1921 by the Narkomat R.S.F.S.R. on National Affairs; in 1923 – set under the supervision of the Oriental Department of the Comintern). Then T. worked at the All-Soviet Research Association of Oriental Studies (1930). In 1933, he headed an expedition of the Research Institute of Nationalities of the U.S.S.R. to Kurdistan.

In 1931, he published his novel ‘Babek’ about a leader of an uprising in Iran and Transcaucasia against the Arabic Caliphate (about 816 – 837). The uprising was held under the ideology of Zoroastrianism against Moslem influence.