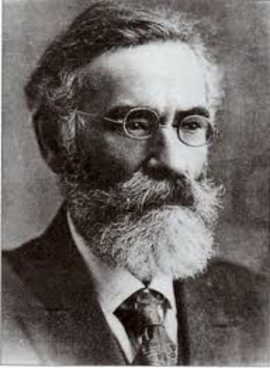 After a short learning in yeshiva, he entered the classical gymnasium in Zhitomir and finished it in 1881; then, he passed competition n for the Natural Sciences Department of the Physical and Mathematical Faculty of the St. Petersburg University. He joined the revolutionary group ‘Narodnaya volya’; in 1882, after students’ protests, he was sent home to Zhitomir, In 1883, he enrolled to the Legal Faculty of the Novorossisky University (Odessa).

In 1883, he was one of organizers of the underground congress of ‘Narodnaya volya’ in Ekaterinoslav; so, he was arrested; in 1886, after three years of his solitary confinement in the central jail of Odessa, he was sent to exile to the island of Sakhalin. There, in 1889-1897, he started to study the life and religious beliefs of Gilyaks (Nivkh), studied and described their language. He expounded his observations in articles which were published in regional and central media: ‘Vladivostok’, ‘Russkie vedomosti’ (1892), ‘Ethnograficheskoe obozrenie’ (1893, 1894). In 1891-1892, he conducted a census of Gilyaks, Oroch, and Ainu peoples. He fpunded a museum of local history on the island of Sakhalin. In 1895, the Society for Local History of the Amur Region, and the Khabarovsk Branch of the Russian Geographical Society achieved a permission to transfer S. from the island to the Amur Region for studying local Gilyaks and other native tribes. In 1895-1896, he organized there three expeditions.

In 1897, the Ac. of Sc. in St. Petersburg gave a petition for his returning from the exile; the same year he came to Zhitomir. In 1901, V. V. Radlov invited him to work as a volunteer at the Museum of Anthropology and Ethnography (in spite of the fact, that S. had no right to live constantly in the capital, because he was a Jew). In 1902, S. got a diploma of the Legal Faculty of the St. Petersburg University and became a regular employee of the Museum.

In 1900-1902, together with V. G. Bogoraz and V. I. Iohelson, he participated in the Jesup North Pacific Expedition, organized by the American Museum of natural History under the leadership of Franz Boas. In 1910, S. made an expedition to Amur.

In 1917, he was Chairman of the Siberian Sub-Commission for the creating of the ethnographical map of Russia, organized at the Geographical Society; since 1920 – Chairman of the Siberian Department of the Commission for Studying the Tribal Content of the Population of the U.S.S.R. He was one of the founders of the Institute of the Peoples of the North. He worked over the new constant exhibition of the Museum of Anthropology and Ethnography after the Revolution 1917.

He also was Chairman of the Hebrew Historical and Ethnographical Society and one of the founders of its Hebrew Museum.

He was arrested in February 1921, during the Kronstadt Uprising, and released on the request of Maksim Gorky.

Correspondent Member of the Ac. of Sc. of the U.S.S.R. at the department of Paleoasian Peoples (1924). He was buried at the Jewish Preobrazhenskoe Cemetery in St. Petersburg.

He made a significant input into studying the primordial religion and its forms, into studying Nivkh, Sakhalin and Amur Ainu people, several Tungus-Manchu peoples. He wrote key research works on the theory of religious studies, including his article ‘The Comparative Studies of Religion’ (1900). His main works on religion were published in a collection of articles ‘The Primordial Religion in the Light of Ethnography’ (Leningrad, 1936) published after his death.