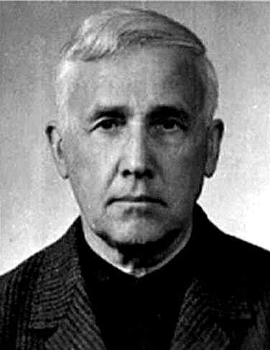 Steblin-Kamensky Mikhail (1903–1981) – philologist, specialist in the history of culture and religion of Scandinavia.

In 1927, he passed the courses of English and taught at the Polytechnic Institute. Later, he graduated from the Philological faculty of the University by correspondence and entered the post-graduate courses of the Institute of Russian Literature of the Ac. of Sc. (Pushkinsky Dom).

In 1943, he defended his Candidate thesis ‘On the Issue of Evolution of the Old English Poetic Style (Substantive Epithet in the Old English Poetry)’; and in 1948 – the Doctor thesis ‘Scaldic Poetry’. Since 1950, he was Head of the Chair of the German Philology of the Leningrad State University.

He made a serious input into the studying of the medieval culture and religion of Scandinavia – first of all, research on ‘Poetic Edda’, ‘Prose Edda’, and ‘Heimskringla’. He studied not only language of those monuments, but also their structure and mythology. On his opinion, the myth existed in the milieu where it seemed real for people who retold it, and its heroes and events were absolutely real as the surrounding world for narrators and listeners. S. built the foundation of the Russian research school of specialists in medieval Scandinavia.