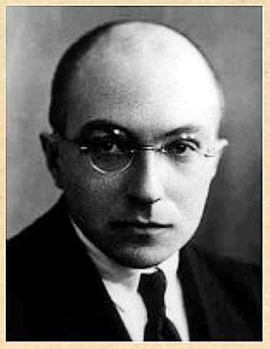 He was born in the family of a priest; he graduated from the Moscow Spiritual Seminary in 1910. In 1915, he graduated from the Moscow Spiritual Academy, and entered the Faculty of Oriental Languages of the Petrograd University; two years after he passed the course at the Hebrew-Syrian Sector and stayed for preparations for the Professor position. Since 1918, he taught Old Hebrew language (grammar) and reading of the Biblical text. He also taught students of other faculties of the Petrograd/Leningrad University, and worked as Researcher at the Research Institute of the Comparative History of Literatures and Languages of the West and East. He was also Secretary of the Collegium of Orientalists at eth Asian Museum; Head of the Hebrew Department of the Asian Museum.

The scale of his research work was unusually vast: from Hebrew mysticism in the Russian culture of the Pushkin epoch to the problems of sources of Karaim amd Hebrew-Arabic literature. In 1919-1920, he also taught in Moscow – at the Lazarev Institute (before its transformation into the Central Institute of Living Oriental languages).

He was Orthodox and kept links to the ecclesiastic milieu. In 1919-1923, he taught at the Petrograd Theological Institute. In 1928-1929, he was a member of the parish council of the church of the Saviour-on-Waters.

In 1920-s, he several times collected manuscripts and books for the Asian Museum; particularly, there was a collection of Oriental manuscripts of the former Kazan’ Spiritual Academy, and more than 900 manuscripts from the Karaim national library in Eupatoria transferred in 1926-1927. In 1929, he was sent for research work to Oxford.

In 1933, he was arrested and sentenced for five years in camps; there he kept his studies. Letters from him stopped coming in the autumn 1937. At the request, his family got the answer, that the affair of S. was reviewed before the end of the previous period of imprisonment and prolonged at ten years more – with transferring him to a camp of special regime without a right of correspondence. Till 1942, Academician P. C. Kokovtsov asked for liberation of S. In fact, the scholar was shot on October 10, 1937. He was rehabilitated in 1989 only.

All three published articles by S. were on the history of medieval Judaism. By the moment of his arrest, he had finished and prepared for publication his book on the Karaim writer of the eleventh century Abul Faraj Harun. The manuscript was lost after the arrest.