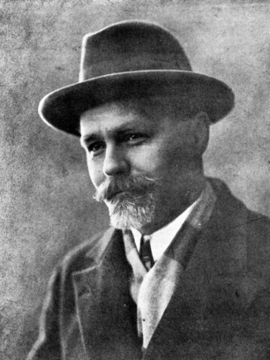 He learnt at the 10th Moscow Male Gymnasium; in 1906, together with brother, he enrolled to the Historical and Philological Faculty of the Moscow University. In 1908-1909, also with his brother, he went at the expedition to the Belozersky and Kirillovsky Districts of the Novgorod Region to collect folklore and ethnographical material. In 1911, he stayed at the Faculty to prepare himself for the Master exams and for his thesis. At the same time, he started to reach students.

He made lectures in Russian literature and folklore at the Moscow Teachers-Training Institute (1911-1919), at the Female Nickolaevsky Institute and O. F. Protopopova private Gymnasium (1913-1917), at the Nizhny Novgorod People University (1916-1918), at the Moscow High Female Courses (1916-1919). After preparing his Master thesis ‘On relation of German Epics with Russian One: German Legends on Siegfried-Sigurd and Russian Tales on the Marriage of Prince Vladimir” (1918), he got a position of Ass. Docent of the Moscow University. In 1918-1919, he headed the Russian Sector of the Ethnographical Department of the Rumiantsev Museum.

In the end of 1919, he was arrested and set into the Butayrskaya Jail; two month later he got freedom without accusations. Just after it, he moved to Saratov, where became Professor of the Chair of Russian Literature of the Saratov University (1919), Dean of the Pedagogical Faculty (1922-1924).

He died on July 30, 1930, in Moscow, after a heavy disease; he was buried at the Novodevichie Cemetery.