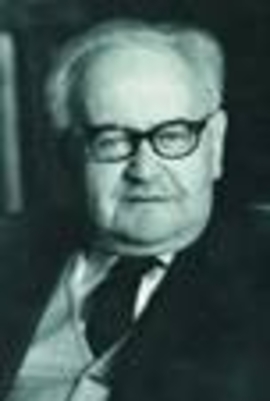 historian Medievalist, specialist in the history of the Reformation.

After 1917, he worked at secondary school and at the district committees on education; in 1921, he entered the Smolensk Institute of People’s Education, than studied at the Faculty of Social Studies of the Moscow State University, at the post-graduate courses of the Russian Association of Research Institute of Social Studies. In 1930-1934, he taught the world history at the Teachers-Training Institute and at the Communist University in the city of Gorky (Nizhny Novgorod). In 1935, he became Senior Researcher of the Moscow Branch of the State Academy of the History of material Culture; in 1937, he defended his thesis ‘The Agrarian Relations in the South-Western Germany in the Fifteenth – Sixteenth Centuries’. In 1938, he became Docent of the Chair of the World History at the Historical Faculty of the Moscow State University, and Senior Researcher at the Institute of History of the Ac. of Sc. of the U.S.S.R. For the book ‘The Popular Reformation of Thomas Müntzer, and the Great Peasants War’ (1947) he got the Stalin (State) Award.

In 1954, he was awarded with the Order of the Labour Red Banner. In 1956, he was elected Foreign Member of the Ac. of Sc. of the German Democratic Republic; in 1959, he got the degree of Ph. D. honoris causa of the University of Leipzig.

One of his research interests was studying the relations of Humanists and the Reformation leaders. He put a special attention at the program documents of the Reformation, which reflected aims and interests of various social groups, the project of Imperial reforms and so on. He studied thoroughly the history of the Peasants’ War and the doctrine of Thomas Müntzer, and it gave him reasons to formulate the conception of the so called ‘Popular – or People’s Reformation’.