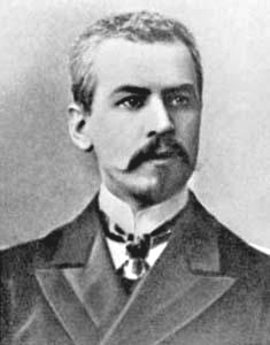 He graduated from the Faculty of Oriental Languages of the St. Petersburg University in 1894. In 1896, after the Master exams, he was sent for the training in Europe, where he studied at such famous scholars as Hungarian Orientalist, Arabist and specialist in Islam Ignác Goldziher, Austrian-Hungarian Orientalist Joseph von Karabacek, and Dutch Arabist, Professor of the Leiden University Michael Jan de Goeje. Later he stayed at the St. Petersburg University; there he has taught Arabic language and Islamic studies for twenty years.

In 1912, he started to work with the magazine ‘Mir islama’ (The World of Islam), founded the same year by the Imperial Society of Oriental Studies. In three issues of that year, there were his essays on the history of Islam.

In 1914, he defended his Master thesis in Arabic literature ‘Abd al-Wahhab-ash-Sharany and His ‘Book of Scattered Pearls’. In 1915-1918, he was a member of administration of the Russian Public Library; since 1919 – Head of the Department of books in oriental languages. Since October 1917, he was free-lancer Professor of the Lasarev Institute of Oriental Languages in Moscow; since October 1918, he made lectures in Islamic studies and Moslem law at the Ethnologic and Linguistic Faculty of the Lasarev Institute.

In 1917, he became a member of the Organizational Committee on the Matters of the Turkestan State University, which was planned for Tashkent. In 1920, he went to Tashkent to organize that university. There he worked as Rector of the Institute of oriental Languages, organized simultaneously with the University. When the Institute was transformed into the Oriental Faculty of the Middle Asian State University, he became Dean of the Faculty; he made lectures in Islamic studies, Moslem law, Islamic history, Arabic literature and language. In Tashkent he took part in the ceremony of passing one of the copies of the Quran of Uthman from the Russian National Library (Leningrad) to Moslems in Tashkent.

Since February 1926, he was elected for Correspondent Member of the Ac. of Sc. of the U.S.S.R., at the Section of Oriental Literature of the Dep. of History and Philology.

In May 1931, he was arrested, together with other teachers of the Middle Asian State University and accused in the counter-revolutionary activity. In January 1932, he was sent out of Tashkent. In July 1934, he returned from his exile and found job at the Turkestan Public Library, where he kept and described oriental manuscripts.

In his last years, he prepared commentaries for the publication of the ‘Book on the Tax’ by Abu Yusuf – and important source on the social and economical history of the Arabic Caliphate. In 1938, he was arrested again and died in the camp.