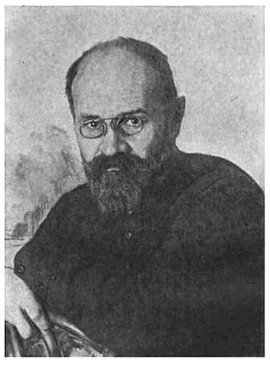 He was born in the vil. Mal’tsevo (now – town of Noginsk) of the Moscow Region. In 1880, he graduated from the Moscow Teachers-Training Institute and started to teach at the college of the basic level in Moscow. Since early 1890-s, he participated in revolutionary movement; in 1895, he was arrested, set under the police surveillance, but did not stop his membership in the Moscow Social Democratic organization. In 1899, he was arrested again, and sent to exile up to 1902. In the R.S.D.W.P. he supported Bolsheviks. Since Autumn 1905, he was included into the lecturers’ group of its Moscow Committee. In March 1906, he made acquaintance with V. I. Lenin and carried out his instructions. In 1907 and 1911, he was a candidate of Bolshevik to the State Duma II and III. In 1911, he was sent to exile to Astrakhan’ under the police surveillance.

In 1914-1917, he was at the Party work in Moscow. In 1917, he became a member of the Moscow Committee of the R.S.D.W.P.; since March 1917 – Chief Editor of the ‘Sotsial-Demokrat’ and ‘Izvestiya Mosckovkogo Soveta rabochikh i krestiyanskikh deputatov’ Newspapers. In October 1917, he was a member of the Moscow Military Revolutionary Committee. He was People’s Commissioner on Finances in the first Soviet government (November 8/October 26, 1917 – February 2/20, 1918).

He was the author of works on the history of revolutionary movement, and on political economy. Together with A. A. Bogdanov and V. A. Bazarov, he translated ‘The Capital’ by K. Marx (publ. 1907-1909). In 1920-s, he took part in philosophical discussions and was criticized as ‘Mechanist’.

He actively participated in the atheistic movement and wrote on the history of religion. In 1919, he reworked the book by the German ethnographer and historian Heinrich Kunov ‘Theological or Ethnological History of Religion?’ (Theologische oder ethnologische Religionsgeschichte? 1910), and published it in Russian under the title ‘The Origin of Our God’. In 1921, he published another book – ‘An Essay on the Evolution of Religious Beliefs’, which was republished several times. He was the author of numerous articles in media. In 1922-1923, he made a declaration in the magazine ‘Pod znamenem marksizma’ (Under the Marxist Banner), criticizing the theory of the origin of religion formulated by M. N. Pokrovsky, who considered: fear of death lied in the base of all religions, and that was why religion could be overcome only when the fear of death would disappear.