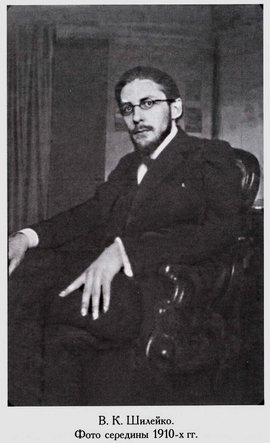 He was a disciple of P. C. Kokovtsov, B. A. Turaev, and M. V. Nickolsky. In 1909-1914, he studies at the Faculty of Oriental Languages of the St. Petersburg University, but he was excluded because he had not paid for two years. In 1913-1918, he worked at the Hermitage (till 1918 – as free-lancer). Since 1916, he was Correspondent Member of the Moscow Archeological Society; the same year he was awarded with the silver medal of the Russian Archeological Society for his book ‘Votive Inscriptions of Sumerian Rulers’ (1915).

He was a member of Collegium on themuseum affairs, and of the archeological commission in 1918. In 1919-1929, he was teacher, than Professor (1922-1929) of the Archeological Dep. of the Faculty of Social Studies of the Leningrad University. In 1924-1930, he was Head of the Assyrian Sub-Dep. of the Dep. of the Classical East of the Museum of Fine Arts (now Pushkin State Museum) in Moscow. Since 1927, he was a member of the Society for Studying the Ancient East (Altorientalische Gesellschaft).

He died of TB at the age of 39 and was buried at the Vvedenskoe Cemetery in Moscow.

He was known as an outstanding publisher and translator of Mesopotamian, Hittite, and South Semitic documents and tsar inscriptions; he made a great input into the understanding of chronology and political history of the early societies of the Ancient Mesopotamia. His achievements as translator and philologist were really great. He was the first one who translated Akkadian literary texts into Russia from original and in verses (Descending of Ishtar into the Underworld; Etana; Tale of Innocent Sufferer; fragments of the epic of Gilgamesh, spells and prayers). He also made translations of historical and literary texts from Sumerian language (Cylinder A of Gudea, cones of Urukagina).

He was an extraordinary poet; he published his poems till 1919 only, but wrote them till the end of his life.

In the field of religious studies, he is well-known for his studies of Mesopotamian spells, prayers, calendar and divination texts. He found a link between the apodosis of astrological texts and the epic of ‘Enuma Elis’, studied several periods of the cult of the god of fertility Dumuzid-Tammuz noting the link of those periods with the rite of releasing birds and with the conception of redemption. He established the hierarchy of ideas about the son and the moon in the Ancient Near East. He interpreted the image of Gilgamesh as a martyr, a wanderer, and a pilgrim; thus, he found out a prototype of the pilgrimage literature of the Near East far ealier than Christianity.