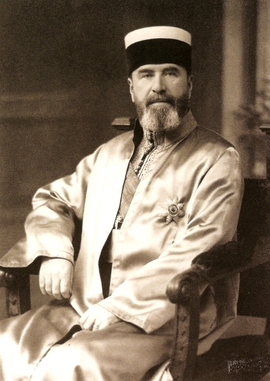 In 1894, after a gymnasium in St. Petersburg, he enrolled to the St. Petersburg University, at the Faculty of Oriental Languages. In 1899, after the graduation, he stayed at the University for further studies.

In 1901-1908, on the recommendation of the Ministry of Foreign Affairs, he was sent to Iran, where he taught the Crown Prince (waliahd) Mohammad Ali Qajar Russian language (in 1909, Mohammad Ali became Persian Shakh, but for a short period).

Having returned from Iran, he served at the Ministry of Foreign Affairs as interpreter/translator from oriental languages; he also taught at the St. Petersburg University – at the Chair of Turkish-Tartar Literatures of the Faculty of Oriental Languages (1909-1916). In 1915, he was elected for the position of gaham/hakham of the Tavrida and Odessa Karaites Spiritual Administration (Yevpatoriya); since 1920, he has lived in Turkey.

In 1928, he moved to Vilnius, where he was elected for gaham/hakham of Lithuania and Poland (1927-1939); in 1940, he signed his abdication (after coming the Soviet poser). In 1939, using his contacts in the Russian community in Germany, sent a request to the Ministry of Domestic Affairs of Germany to consider the issue oa Turkic, not Semitic origin of Karaites. The experts supported his request, and it saved Karaites of the East Europe from genocide.

In 1945, he abdicated from the position of gaham/hakham for the second time and sent a letter about it to the Representative in the matters of religious cults of the Lithuanian S.S.R. He worked as Researcher at the Institute of History of the Lithuanian Ac. of Sc. Doctor in Philology, Professor. He was specialist in Turkic languages, archeology, numismatics, history, folklore, and literature of Karaites. He wrote about a hundred works in Russian, Polish, and Tartar languages, collected a unique collection of Karaite documents, objects of the supplied arts. He initiated the foundation of the Museum of the History and Culture of Karaites in Trakai (Lithuania).

He supported the idea of non-Semitic (Turkic) origin of Karaites (Karaims) and shaped the doctrine of ‘de-Judaization’ and ‘militarization’ of the history of the Crimean and Lithunian Karaites.