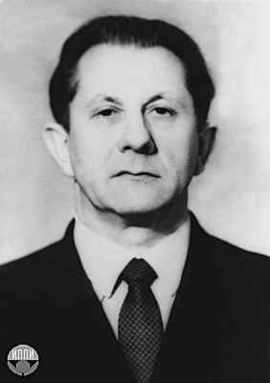 Kopeikin, in 1937 he took the surname of his wife S. G. Rutenburg

In 1929, he graduated from the Teachers-Training Institute in Stalino (Donetsk); he taught history in a secondary school in the settl. of Voznesensky Rudnik. In 1933, he passed the curses for young officers of the Red Army and got the rank of Reserve Sublieutenant.

In 1934, he moved to Leningrad and entered the Historical Faculty of the Leningrad Institute of Philosophy, literature and History; at the same time he worked as a school teacher of history. In May 1938, he got the excellent evaluation for his research paper ‘From the History of Italian Pawnshops in the Fifteenth Century; on a Manuscript from the Archive of the Leningrad Branch of the Institute of History of the Ac. of Sc. of the U.S.S.R.’. On July 28, 1938, he was arrested in the frame of the affair of Esperantists – he was accused in espionage and spent 11 months in jail; he was released on July 5, 1939, and returned to the Faculty. In 1940, he graduated from the University and entered the post-graduate courses at the Chair of the History of the Middle Ages.

From June 22, 1941 till February 7, 1946, he served in the army during the WWII. After the demobilization, he returned to the post-graduate courses (1946-1948). Since 1946, he was Researcher, Academic Secretary, Head of a Sector at the Leningrad Branch of the Institute of History of the Ac. of Sc. of the U.S.S.R. (1965-1987). He defended his Candidate thesis ‘Florentine Companies of the Fourteenth Century (From the History of Early Capitalism in Italy)’. Since 1950, he taught at the Leningrad State University. In 1959, he defended his Doctor thesis ‘The Popular Movements in the Cities of Italy. Fourteenth – Fifteenth Centuries’.

He was one of the leading Soviet specialists in the history of Italy of the Late Medieval and the Renaissance periods. He was interested in various issues of religious and cultural history. He wrote works on outstanding persons of the Renaissance, economic relations in Italy; he put a special attention at the place of religion in the Renaissance culture, and at its influence anf the humanistic thought.