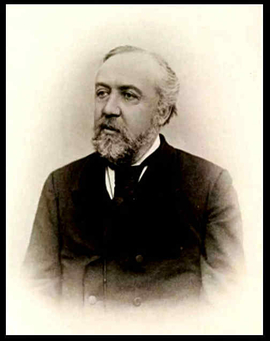 He enrolled to the Faculty of Oriental Languages of the St. Petersburg University in 1866, at the age of 17. At the moment, there was the second year of teaching by V. F. Girgas, who had just defended Doctor thesis on the rights of Christians in the east according the Moslem law (1865). R. passed training in Leipzig (1870), at the greatest Philologist-Arabist G. Fleischer. Soon after it, he defended his Master thesis ‘Old Arabic Poetry and Its Criticism’ (1872). After it, R. got a position of Docent at the St. Petersburg University; since autumn, he started teaching at the first years. In 1870-s, R. and Girgas gathered materials for the manual in Arabic grammar and additional educative materials. That cooperation has been fruitful for 14 years, till the death of Girgas in 1887. Particularly, they worked out the ‘Arabic Reading’ for students of the first year, which replaced the earlier Reading by Boldyrev; it is still in use. Both R. and Girgas studied under the supervision of M. T. Navrotsky and V. V. Grigoriev.

In 1879, R. was elected for Adjunct of the Ac. of Sc. ‘on the Mahomettan languages and literature’; immediately, he started to make a detailed description of Arabic manuscripts of the Asian Museum. In 1881, he became its Director; and by the end of the same year, the first volume of the Catalogue was published; it included 300 manuscripts of the Museum – about 43% of the collection. But the work was broken. And R. Had to quit the Ac. of Sc. and the Asian Museum because of his conflict with the Secretary of Ac. of Sc. C. S. Veselovsky.

In 1893-1902, R. was Dean of the Faculty of Oriental languages of the St. Petersburg University. He shaped Russian Arabic studies for many years ahead, he taught a number of greatest orientalists: N. Ya. Marr – specialist in the Caucasian studies, V. V. Bartold – historian of the Middle Asia, V. A. Zhikovsky – Iranist, as well as I. Yu. Krachkovsky, A. E. Schmidt, C. A. Inostrantsev, and N. A. Mednikov.

He was interested in various aspects of Arabic poetry, medieval fiction, Christian Arabic historical monuments, Arabic information about Slavs, Arabic versions of such great compositions as ‘Kalila wa Dimna’, and ‘Barlaam and Joasaphat’, and put a special attention at description of Arabic manuscripts. Krachkovsky noted, that R. was both Arabist and Iranist. As a student, he also learnt Hebrew at D. A. Khvolson. Marr characterized R.. as apecialist in Arabic and Islamic studies, and also in Byzantine culture, Pre-Islamic poetry, Iranic epics, Turic and Caucasian studies.