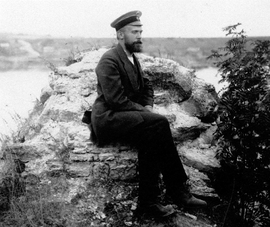 In 1900, after a commercial school, he enrolled to the Historical and Philological Faculty of the St. Petersburg University. Being student, he started to work for the Archeological Commission and for the Russian Archeological Society.

After graduating the University in 1910, till 1914, he was Curator of the Archeological collection of the Ethnographical Department of the Russian Museum. After the Revolution 1917, he worked at the State Academy of the History of Material Culture. He studied archeological monuments of the North-West of Russia. He made preliminary evaluation of sites, organized excavations of mounds, made a map of zhal’niks (ancient burial mounds) with their descriptions, studies places of sacrifices. In 1909-1913, he studied the Earthen site of the Old Ladoga, In 1912, he was sent to the Southern Ladoga district to search for new monuments. He draw several dozens of wooden crosses at the roads, by entries to villages (seventeenth – eighteenth centuries). In 1913 – 1914, he partly fixed medieval painting of the stone St Nickolas Church of the St Nickolas Gostinopolsky Monastery. He participated in the opening and restoration of frescos of the twelfth century in the St George Church in Old Ladoga.

Since late 1920-s till mid-1930-s, he made archeological excavations in the Crimea. In 1928, he made the first excavations of the cave town-fortress Eski Kermen, founded by Byzantines in the south-western part of the Crimea.