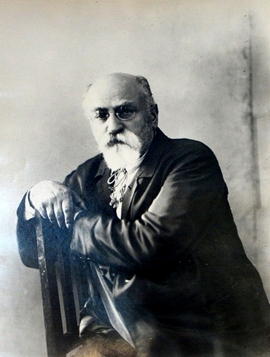 In 1881, he was excluded from the Odessa gymnasium; he learnt himself, knew many languages and demonstrated deep and broad knowledge in various fields.

In the late 1880-s, from the youth enchantment with Narodniks he went to Marxism; he was connected with the Group “Liberation of Labour’. In 1891, he was arrested and has stayed in jail for five years; later, he was sent to Kishinev under the police surveillance. In 1900, he went abroad, where he studied the history of Marxism and the First International.

During the First Russian Revolution, he was in Odessa, in St. Petersburg, organized the trade union movement in Russia. In 1907, he was elected to the State Duma (Social Democratic fraction). In 1907, he was under short arrest and went to emigration after it.

There he worked in archives and in the library of the British Museum in London, studied non-published manuscripts of Marx and Engels, including those at the private archive of Laura Lafargue (a daughter of Marx). As a result, he published two volumes in German (1917) with articles by Marx and Engels with comments and his own forward. Besides, he published his numerous works on ideas and activity of Marx and Engels. The most known was ‘The English-Russian Relations in the Evaluation of K. Marx’.

In the spring 1917, he returned to Russia. In Petrograd he headed the trade union movement, kept independent position in the party and often had hot disputations with its leaders (for instance, he was against taking power by Bolsheviks, against the liquidation of the Constituent Assembly, against separate peace with Germany on its terms).

In 1918-1920, he headed the administration of archives. In 1921, he founded the Institute of K. Marx and F. Engels; he was its Director till 1931. He collected books for it, made it the world centre of studying Marxism. Thanks to that, the Institute published more than 150 books (including those on the matters of religion) in ten years of his supervision.

He was the author of several hundreds of works, only in 1921-1931, he prepared about 200 works, including comments, introductions and so on. Till nowadays, his heritage is not studied.

In the night from 15 to 16 February 1931, he was arrested – as if for the keeping counter-revolutionary documents in the Institute of K. Marx and F. Engels. He was sent to exile to Saratov; in December 1933, his exile was prolonged on two years. In 1934-1937, R. collected books for the library of the Saratov State University, translated works by D. Ricardo, F. Mering et al. On July 23, 1937, he was arrested again – with accusation in Trozkism. On January 21, 1938, he was sentenced to shooting. He was shot the same day in Saratov; rehabilitated in 1958.