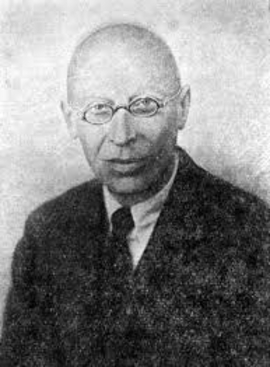 He was born in the family of a small clerk. In 1905, he enrolled to the Physical and Mathematical Faculty of the Kievan St Vladimir University. In 1907, he was arrested for anti-tzarist propaganda. After he was released from the jail, R. transferred to the Historical and Philological Faculty; in 1913 he graduated from it with the silver medal (the graduation paper on Apollonius of Tyana).

He succeeded to find teaching position only after the cancellation of anti-Jewish limitations. Since 1919, he taught at the Kievam Teachers-Training Seminary, and at the Kievan People’s University; later – at the Institute of people’s Education in Zhitomir. Since 1929, he was in Moscow, worked for the ‘Bezbozhnik’ (Atheist) Publishing House; he prepared series of translated anti-religious books by western authors. Since 1931, he made lectures at the Institute of Philosophy at the Communist Academy, edited books for the ‘Moskovskyi rabochii’ (Moscow Worker) and Mospartgiz Publishing Houses.

He composed two reading books: ‘Original Sources on the History of Early Christianity’ and ‘Classical Critics of Christianity’, and wrote works on Ancient Judaism.

In 1935-1937, he was Actual Member of the State Academy of the History of material Culture. He actively participated in the discussion on the slavery system in the Ancient East. In 1937, he defended his Doctor thesis in History. In 1937-1941, he was Professor of the Moscow State University.

Since 1937, he was Deputy Chief Editor of the magazine ‘Vestnik drevnei istorii’ (Herald of the Ancient History). From 1938 till the end of his life, R. was Senior Researcher of the Institute of History of the Ac. of Sc. of the U.S.S.R.