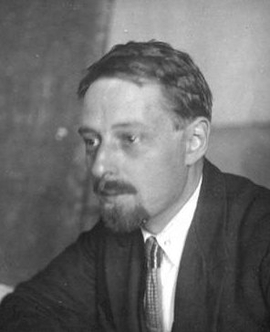 In 1914, after the Annenschule (school at the Lutheran Church of St Anne in St. Petersburg), he enrolled to the Historical and Philological Faculty of the Petrograd University, where he studied Russian and German Philology. He graduated from the university in 1918; during the WWI, on his own will, he passed through medical courses and worked as a sanitary at a military hospital in Petrograd.

In 1921, he started to study at the Petrograd Theological Institute, but soon left it. In 1918-1928, he worked as a teacher of Russian language and literature at the Third Teal school (it was transformed into 102 Joint Labour school), supervised pupils of the senior level. In 1926-1934, he taught German language in some high schools and technical colleges of Leningrad; he was Head of the Chair of Foreign Languages at the Plan Institute, and at the Chair of German Philology at the Second Leningrad Teachers-Training Institute of Foreign Languages.

In August 1930, he was arrested and stayed in prison for about a year; then, he got freedom.

During the WWII, together with other personnel of the Leningrad State University, he was in evacuation in Saratov. In 1944, with much difficulties, he got a permission to return to Leningrad.

He died in Leningrad on August 22, 1970, and was buries on the Northern Cemetery.

He founded the comparative typological method in folkloristic, and became one of the founders of the contemporary theory of text.

For religious studies his research of the typological similarity of archaic cultures and later cultural institutions, rites of passage, calendar rites, and ritual laugh are of special importance.