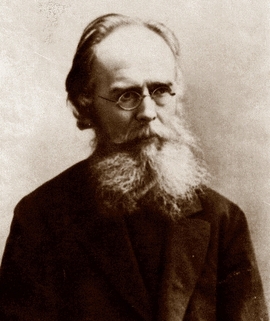 In 1856, he graduated from the Historical and Philological Faculty of the Kharkov University; later, he built his own research school of linguists in Kharkov.

For a short time, he had worked as gymnasium teacher of literature; in 1861, he defended his Master thesis ‘On Some Symbols in Slavic Folk Poetry’ and started teaching at the University. In 1862, he went abroad and visited lectures at the University of Berlin, studied Sanskrit, travelled. In 1874, he defended hid Doctor thesis ‘From the Notes on Russian Grammar’. Since 1875, he was Professor of the Kharkov University.

In 1875, he was elected for Correspondent Member of the Ac. of Sc.; Laureate of the Lomonosov Award (1875); Member of the Society of Amateurs of Russian Literature at the Moscow University (1877); he was awarded with two Uvarov golden medals (1878 and 1879), and the Constantine Medal of the Russian Geographical Society (1890); Member of the Czech Research Society.

His works on mythology and folklore played a significant role in the development of religious studies in the Russian Empire.